What To Do When Your Sailboat Can't Go Any Faster

While I'm not as big a fan of America's Cup-level yacht racing as Zendo Deb at 357 Magnum, I really appreciate watching it and I'm especially appreciative of the technology.  See, there's a hidden problem that they all fight against - the physics of going fast in water, about 800 times denser than air.  While there are ways to gain small bits of advantage, the speed of a hull in the water is limited by the waves it creates passing through that water.  There's a well-defined speed that the boat can't go above.

For a displacement hull - one in which the entire water line of the boat is in the water - the hull speed is mathematically related to the hull length.  The exact shape of the hull matters for the exact number, but you can get within an engineer's rule of thumb by remembering Speed = SQRT (1.8 * waterline length).  (Where SQRT is the square root of the term in parentheses).  Waterline length in feet gives the speed in knots.  This quickly tells you the longer the boat, the faster it can go.  For example, the aircraft carrier USS Gerald R Ford was just launched, and while the Wikipedia page doesn't specify the length along the waterline, they give the overall length as 1106 feet.  Based on some photographs on that page, let's guess the waterline length is closer to 1000 feet.  That immediately tells us that the maximum speed for the Ford is around 42.4 knots - or about 48.8 statute mph.

You've probably seen racing powerboats.  These boats are tiny in comparison to the Gerald R Ford, one class is 30' feet long, but they can do 70 mph on the ocean.  They hydroplane, where the power of the engine and shape of the hull work to push most of the hull out of and on top of the water.  Because most of the hull is out of the water, drag is reduced and they're not limited by the physics of waves that sets the displacement hull speed.  Most "bass boats" and other outboard fishing boats also hydroplane, so you're probably used to seeing that.

Getting back to the racing sailboats, if they want to go faster, and they're tightly crimped by the laws of physics, what can they do?  How about getting the boat out of the water?  About five years ago, the yachts shifted from using their keel to counterbalance the forces on the sale to putting a lifting foil onto the horizontal portion of the keel.


When just one of these L-shaped components are in the water, the 3-to-6 ft. airfoil on the bottom creates enough lift as it is pulled through the water to lift the entire boat (about a 3-ton load). The daggerboards also convert side forces into driving or forward-pointing forces. With the boat “flying” above the surface of the water, drag is substantially reduced and the boat’s speed increases dramatically. American Cup Class yachts now sail at up to 60 mph, four times faster than the single-hulled boats in the 2007 race. 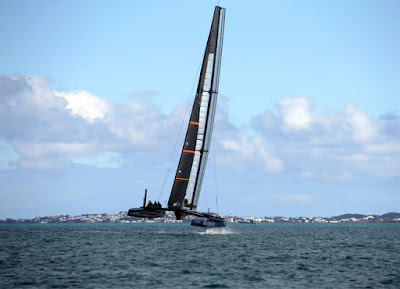 If you look carefully, you can see the entire boat is in the air except for one foil in the water, on the right hull of the catamaran.  The crew is huddled on the left hull to counterbalance it.

With the entire race (lots and lots of bucks) riding on the daggerboard, not to mention the three tons of boat and lives of the crew, they gets a lot of attention in design.  No amount of computer simulation and analysis is too much - Finite Element Analysis (FEA) and Computational Fluid Dynamics (CFD) are contracted to partner companies.  Before that can start, though, strategic design decisions need to be made by informed crew.


The choice of which approach to take—one or two sets of daggerboards—is not driven by FEA or optimization. It’s a strategic choice on the part of the teams. “Two boards might give you an advantage against a team with an all-weather board,” says David Durocher, an Altair engineer who worked with Team Artemis. “However this comes at the risk and cost of building backups for both boards.”

FEA does play a role, mainly to evaluate specific design ideas. Simulation is what allows Altair to come up with the final design quicker and more economically. “It is faster and much less expensive to build and run a simulation than to build and run tests on physical prototypes,” says Durocher. “And we can dramatically improve on this by automatically finding the best design idea using computational optimization tools.”

With their extreme demands for strength at light weight, the daggerboards tend to be made from laminated carbon fiber, just as used in high performance aircraft.  The designed board is then put through CFD simulations to determine lift and sideways forces it can provide. 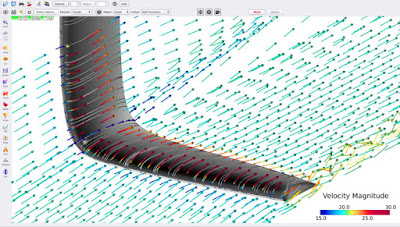 A CFD simulation image shows particle velocity vectors of the water passing over the daggerboard.  Note the speed up over the top of the foil where the vectors go red.

Exactly when and how to use the daggerboards is a tactical decision made by the yacht's captain.


“The boards are fully raised or fully lowered every time the boat tacks or jibes, maybe about 20 to 30 times per race,” says Durocher. “And it takes five to 10 seconds to do this.”

Race series rules say that no power machinery is allowed, so several of the crew—usually large, muscular sailors referred to as grinders—spend most of their time turning cranks that power a hydraulic pump. Hydraulic power is then used to move various components, including raising and lowering the daggerboards.

The last 35 years has seen a series of advances in the design of these racing sailboats, starting with the Australians' winged keel in 1983, and the changes to wing sail designs in the last 10 years that now allow the boats to go faster than the wind pushing them.

It has become a high tech race between groups of sailors backed by groups of engineers.  It's long past being a group of yacht boys out for a friendly sailboat race.