Meet The Crew Retiring Along with Voyagers 1 and 2

In my History of the World, a strong candidate for the title of "Greatest Achievement of Mankind" is the two Grand Tour satellites of Voyager 1 and 2.  As we're coming up on the 40th anniversary of the launch of the two probes, there has been some celebration, some retrospection, a PBS Special "The Farthest" on August 23rd and some recognition of the handful of people who have supported the program over the years.  Remarkably, some of those people have spent the entire 40 years supporting the missions.

The mission almost didn't happen.  In the late 1960s, a doctoral student named Gary Flandro was working at the Jet Propulsion Lab in Pasadena.  He was given the assignment to consider missions beyond the planned Mars missions.  Plotting the positions of the planets of all of the outer planets for the coming 20 years, (with pencil and paper) he realized that a trajectory was possible where a probe could use each planet in series as a gravitational slingshot to the next, and complete a tour of Jupiter, Saturn, Uranus and Neptune in 10 or 12 years rather than the three decades such a venture would require otherwise. The mission launch window would open for a matter of months in the late 1970s, and then the geometry would be gone - not appearing for another 175 years.


It was an ambitious idea at a time when the apex of interplanetary exploration was Mariner 4 shooting 21 grainy photos as it flew past Mars. No probe had ever functioned for anything close to a decade in space. None had the intelligence to manage complex planetary encounters at vast distances without constant human hand-holding. Playing crack-the-whip past multiple planets might work in theory but had never been attempted in practice. "I was told, 'This is impossible; stop wasting my time,'" Flandro recalled.

NASA swallowed hard and proposed a grand tour mission anyway, but Congress rejected it, instead approving a cheaper, stripped-down version that would venture out no farther than Saturn.

The JPL spacefarers responded in the tradition of the hardiest explorers of earlier epochs. They cheerfully agreed to the plan, assured one another that Congress didn't really understand the situation, and quietly went to work designing and building two tough, smart spacecraft capable of going all the way to Neptune.

The Voyagers reached Jupiter in March of 1979,  capturing images of lightning in its cloud tops and astounding scientists — who had assumed all moons were as barren as our own — with pictures of eight active volcanoes on its satellite Io.  Europa, another Jovian moon, was encased in a shell of water ice, cracked in places by what appeared to be the tides of an ocean below. The photographs revealed themselves on control-room monitors pixel by pixel, row by row.  Similarly, Voyager 1 arrived at Saturn in November of 1980 with Voyager 2 arriving  nine months later in August of 1981.   The program would have been over after the second Saturn encounter, but by that time President Reagan had granted them an extension for the Grand Tour that had been planned all along.


The final flyby, of Neptune’s moon Triton, took place on a hot August night. Afterward, everyone celebrated with Champagne, cold cuts and drunken singing; on the JPL lawn, Chuck Berry performed ‘‘Johnny B. Goode,’’ one of the tracks included on gold-plated records of human sights and sounds attached to the spacecraft for any intelligent life that might find them. Then, gradually, the hallways grew quiet. [Project Scientist Dr. Ed] Stone and his colleagues moved on to new projects while analyzing Voyager data part time; the flight team laid off 150 engineers (many of whom went on to staff subsequent missions). The probes’ new goal was to reach interstellar space. But though scientists had measured the speed of the solar wind that forms the heliosphere, the properties of the matter beyond it had never been analyzed. How much pressure it exerted on the bubble, and thus the size of the bubble, were a mystery. So, too, was how long — years? decades? — it might take a craft to escape it. 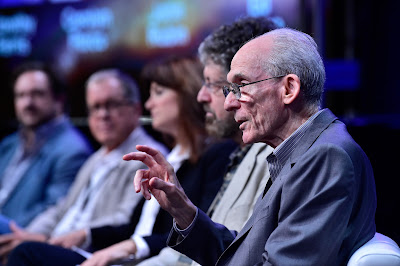 Ed Stone, closest to the camera, was the Voyager Project Scientist from 1972 through the end of the Neptune flyby.  This was at a press conference for the PBS special.  Rahoul Ghose, PBS photo.

The New York Times, of all places, puts together a wholly nice article about the mission and the team, with virtually none of the lefty overtones I expect from the Times; possibly because there's nothing to milk here.  It had nothing to do with global warming (in the late 70s the cause was global cooling) or any other liberal cause celebre, and if nothing else, was a government program. 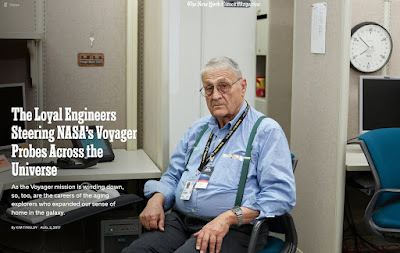 In the early spring of 1977, Larry was a 40 year old engineer at the JPL.  The Los Angeles native, who had never driven as far as Tijuana, climbed in his Toyota Corolla and set out for Cape Canaveral, 2600 miles away.  His mission: to support the launch of Voyager 1.  A fleet of trucks and cars carried the spacecraft and the "key contributors" (like Larry) along to the Cape (it's JPL policy not to put everyone in one vehicle, as insurance against the remote possibility of disastrous crash).

It took six months, working in shifts around the clock, for the NASA crew to reassemble and test the two spacecraft.  Voyager 2 actually launched first, on August 20, with Voyager 1 launching 16 days later on September 5, 1977.  Voyager 1 was given a faster trajectory, so that it had overtaken Voyager 2 within the first two years, arriving at Jupiter four months ahead of its sibling. 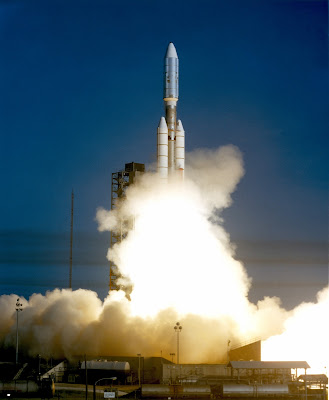 
For the foreseeable future, Voyager seems destined to remain in the running for the title of Mankind’s Greatest Journey, which might just make its nine flight-team engineers — most of whom have been with the mission since the Reagan administration — our greatest living explorers. They also may be the last people left on the planet who can operate the spacecraft’s onboard computers, which have 235,000 times less memory and 175,000 times less speed than a 16-gigabyte smartphone. And while it’s true that these pioneers haven’t gone anywhere themselves, they are arguably every bit as dauntless as more celebrated predecessors. Magellan never had to steer a vessel from the confines of a dun-colored rental office, let alone stay at the helm long enough to qualify for a senior discount at the McDonald’s next door.

The Times introduces us to the crew.  Enrique Medina, an attitude and articulation control system engineer, he joined the team in 1986.  Roger Ludwig,  a telecom engineer has been with the Voyager team since 1989.  Tom Weeks, hardware engineer, who joined in 1983.  Sun Kang Matsumoto, an engineer who started in 1985.  Jefferson Hall, mission flight director, who began working on the Voyager team in 1978, before the Jupiter encounters.  Finally, Suzanne Dodd, flight-team project manager; Voyager was her first job.


At the mission’s outset, the flight-team members were mischievous kids. They relieved stress with games and pranks: bowling in the hallway, using soda cans as pins; filling desk drawers with plastic bags of live goldfish; making scientists compete in disco-pose contests. Now, by 1990, they were older, with kids of their own. They had experienced the deaths of colleagues and watched others’ marriages falter as a result of long hours at the lab. With no planets to explore, they spent the decade doing routine spacecraft maintenance with a fraction of their bygone manpower. Six of the current nine engineers were on the team then. Sun Kang Matsumoto, who joined the mission in ’85, studied so diligently to master the new roles pressed upon her that her sons learned the spacecraft contours by osmosis. When her eldest was 8, he surprised her with a perfect Lego model; now in college, ‘‘he calls and asks, ‘How is Voyager?’ Like, ‘How is Grandma?’ ’’ Matsumoto says.

The mission originally occupied three floors of Building 264 on the JPL campus, home to many of the lab’s highest-profile projects. But soon after Neptune, says Jefferson Hall, who joined the project in 1978, ‘‘we were booted out.’’ Their first move was into the former offices of a mainframe-computer company in Sierra Madre.

Larry Zottarelli retired in 2016, the year he turned 80.  He gave six months notice so that he could train a successor.  The Times author, Kim Tingley, writes:


I had stopped by his office to say goodbye and ask him what he planned to do with his newfound freedom. I pictured him in the Doretti, flying down the Pacific Coast Highway, wind in his hair. But he seemed to be in no mood for talking. I wished him well and turned to go. Then he spoke. ‘‘I expect my second stroke will be on the 17th of November,’’ he said ruefully, gesturing toward his empty wall calendar. ‘‘Life expectancy is five to seven years at my age on retiring, so —’’ He paused. ‘‘That was humor, I guess. I’m not looking forward to being even older. Got no choice in the matter.’’

I asked if he ever found himself thinking about the billions of years that the Voyagers will circle the center of the galaxy, long after our sun has exploded, scattering more stardust throughout the universe. ‘‘Of course,’’ he said. ‘‘I was raised in the Roman Rite. I’m pretty much an atheist. But what is the meaning of life? It’s not Monty Python, O.K.?’’

Had he reached any conclusions about what it is? ‘‘Well, on Earth, yeah,’’ he said. ‘‘One species always prepares the way for the next generation — that’s all.’’

The Voyagers keep coasting along, with some sensors on and still sending back new data.  The power is so low and the pair so far away that only three antennas on earth are big enough to receive the Voyagers' data.  The JPL still has a page dedicated to the latest updates from the pair.  Their power, which comes from Radioisotope Thermal Generators (radioactive decay) is dwindling.  There is really now way to know that the probes will survive until there's not enough power to transmit, no way to know if they'll make it to the 50 year, "golden anniversary". Considering the vast emptiness of space, they're expected to travel long after they've gone cold.  Perhaps coasting for billions of years in the nearly absolute zero deep freeze of space. 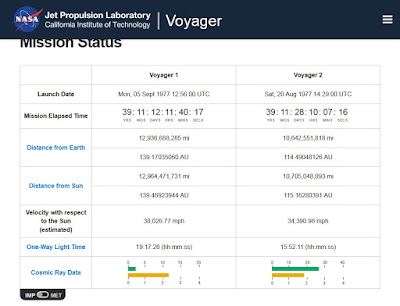 The Times article is long, but if you're a space geek, you'll want to read the whole thing.  I couldn't tell you the last time I watched PBS, but I think "The Farthest" is getting scheduled on the DVR.