Daddy, Where Do Nails Come From?

Did you ever get that question?  Got an answer?


Originally located in Wareham, Massachusetts, Tremont Nail Company has been making cut nails since 1819. Gary Franklin’s great-great-grandfather started working at Tremont as a nailer in the 1850’s, and since then five generations of Franklins have worked as nailers at Tremont. It’s all part of a heritage that Tremont is very proud of.

The machines themselves haven't been in the factory since 1819, but the company web page says many of them are 125 years old, making steel nails the same way they were made in the 1890s.  The video (you've got to spend the 3-1/2 minutes to see the machines making nails) speaks of the very first nail-making machines being invented by Ezekiel Reed in the late 1700s and the company speaks about them being used at Tremont from their founding in 1819. 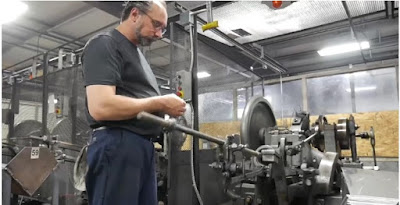 Gary Franklin taking a quick inspection of a nail.  A few years after joining Tremont Nail Company in the 1850s, Gary's great-great-grandfather was drafted to go fight in the civil war.  When he got out, he went back to work there.   He says, "my dad actually worked with his grandfather and his great-grandfather for a short spell".  For his part, Gary says he started working there in 1981, so he has been making nails for over 35 years.  He has a 13 year old son, who may some day join the long lines of his family.

I'll bet that, like me, most of you dear readers wouldn't think that nails are still made in America, and that maybe one or two people knows about Tremont nail.

Posted by SiGraybeard at 5:11 PM