It's not like it's a good thing it's ending, just that it's remarkable that we've gone this long - almost 12 full years since the last Category 3 or stronger hurricane hit land in the US.  The 2PM EDT forecast shows that Harvey is still offshore, but winds are 120 MPH, making it a Cat 3 storm.

Data from an Air Force Reserve Hurricane Hunter aircraft indicate
that the maximum sustained winds have increased to near 120 mph
(195 km/h) with higher gusts. Harvey is a category 3 hurricane on
the Saffir-Simpson Hurricane Wind Scale. The latest minimum central
pressure reported by the aircraft is 943 mb (27.85 inches). 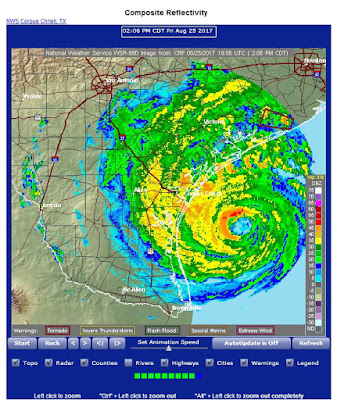 They're reporting winds at 53 mph already.  I would guess landfall will be around 10 PM local time; about 8 hours from now, but that's a WAG.

While Category 3 hurricanes are nasty storms, the unusual thing about Harvey is that it's the first in almost 12 years - 11 years and 10 months.   Hurricane Wilma came ashore at Cape Romano, Florida at 6AM on the 24th of October 2005, and that was the last time a major hurricane made landfall in the US.  Hurricanes in general and Category 3 storms in particular are not really unusual in the Gulf in August.  They're just part of the normal global weather patterns over the last century or so.

Unfortunately, you know where this is going.  Hurricanes used to be naturally occurring weather events and totally nonpolitical until Al "release my 2nd chakra" Gore put a hurricane emerging from a smokestack on the cover of his Inconvenient Book - emphasizing that hurricanes were a product of global warmening.  The basic ideas are what I call elementary school meteorology - hurricanes need warm water, global warming will warm the oceans, presto: more hurricanes.  That wasn't a common view among people who actually study hurricanes for a living at the college level or at the National Hurricane Center.  There are other factors that affect hurricanes: the El Niño Southern Oscillation is the best known, but there are also cycles and multi-decade long cycles affecting them that aren't well predicted.

That means it's inescapable that Harvey is going to get blamed on Global warmening, or climate chaos, or whatever they're saying these days.  I think the moment of peak supidity of blaming storms on that was Hurricane Sandy.  Like Harvey, Sandy wasn't an unusual storm in any sense other than being the first one in a while.  Sandy was a Cat 1 storm, so much, much weaker than Harvey (the damage from wind scales as wind speed squared).  Sandy just happened to hit at a bad tide, in a bad place, and was the first hurricane in memory for the people affected by it.


In general, people don't like too many details and they especially don't like to do any math, so it's great when some "philosopher/priest scientist", preferably with a white lab coat, tells them what to think.  Caleb Shaw, over at Watts Up With That, posts a wonderful "Reply to Hurricane Sandy Alarmists" just full of snark.  Of real interest is how he compares Sandy's record storm surge to the storm of 1821. The difference between them is that Sandy hit at peak high tide, on a full moon, while the "Great Gale of 1821" hit at low tide under a very different moon.  It can be calculated that the 11.2 feet of surge from the 1821 storm, if moved to the same tide and moon phase, would have been 19.2 feet.  Sandy was 13.82 feet.

Unfortunately, the forecast is looking really awful for the Texas Gulf coast.  The 5 day predictions have the storm barely moving.  It goes ashore, weakens to a tropical storm, then retraces its path inland for 24 hours before heading up the coast into the Houston and Louisiana areas.   Note the 5 day uncertainty zone, that really huge speckled area that shows the uncertainty of its position.  The uncertainty even puts it potentially farther offshore than it is right now! 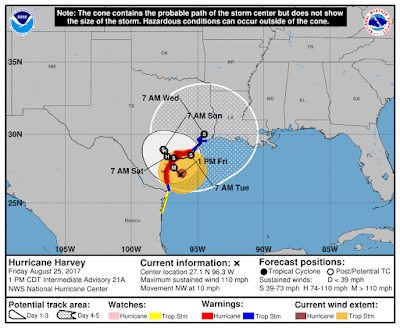 It's a fact of life that there's going to be tons of people in the target zone who are unprepared.  Shoddy construction will come down.  People will get hurt and it's highly likely some will die.  There is going to be genuine human suffering on a large scale.  But as I said about Sandy, using that suffering for political gain by blaming everything on "global warming" so that you can extort more money out of people is just plain wrong. Worse, it's just plain evil.

Posted by SiGraybeard at 4:50 PM