Two nights ago, when I wrote the first piece, I spent too much time looking for and not finding a chart I had seen which ranked the longest running bull markets in US history.  I found it tonight, and it's worth doing an addendum. 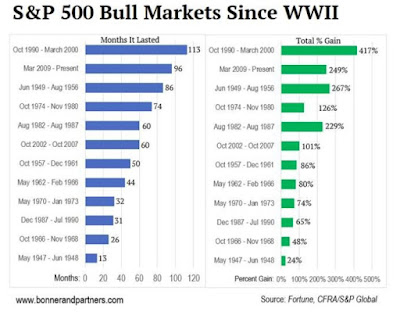 Here it's easy to see that the present S&P 500 Bull Market is the second longest in duration, but the third highest in total % gains.

Like the other charts I posted, this one is from Bonner and Partners, an independent publishing house that dispenses the "folksy wisdom" of founder Bill Bonner and his group of writers.   Since I read more of his views on the world economy than anyone else, I'm sure I'm more influenced by his take on things than anyone else.  I make no claims to special insights, I'm just "some dood with a blog".

Look around at the out-of-business stores in your neighborhood; look at the empty houses.  Does this really seem like a bustling, growing economy?   There's 17 months difference between this bull market and the longest, the Dot-Com boom of the 1990s.  Does it really seem to you like this market could go up for another 17 months?  For as long as I can recall, I've been saying that the global economy is so distorted by the manipulations of the central banks that they've destroyed all the signalling and information that creates a working economy.  With interest rates below inflation, or below zero as they are in so much of the world, "free money" removes part of the incentive to be careful with cash and expenditures.  The world reeks of malinvestments. 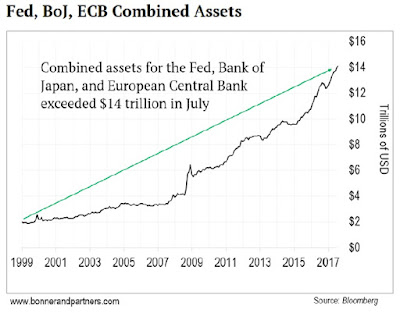 There's a very obvious discontinuity around the crash of '08/early '09.  Not only did the combined assets jump $2 Trillion, but the slope increased; the rate at which central bank assets were growing.  In 2016, the slope jumped up again.  Notice, though, that this graph doesn't include the People’s Bank of China, the Bank of England, the Swiss National Bank, and the “other” central banks. When you include those, you find that the ten largest central bank balance sheets add up to over $20 trillion in assets.  $20 trillion is around 1/5 of the world's total GDP.  It’s 29% of the total value of the world’s sixty largest stock exchanges ($70 trillion).  It's virtually also the US National Debt. 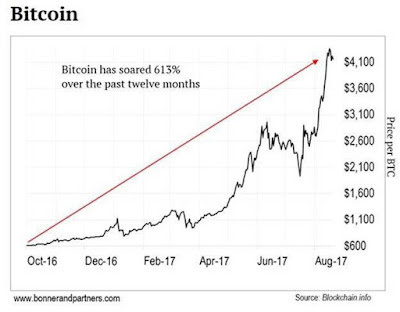 Bitcoin was designed to be like digital gold.  Only a certain amount will ever exist, and the more that exists, the harder it is "mine" new Bitcoins.  Newer, faster computers are slowed by the algorithms so that technology doesn't give you an advantage in mining the "harder to mine deposits" - it's said that the amount of effort required to mine gold is the same as it was thousands of years ago.  We have much better technology but the deposits are much harder to mine.  So think of this chart as being gold and bear with me for a minute.  You can say "gold has gone up", but if your standard is gold, you're looking at it backwards: it really says the dollar has gone down.  Likewise, you can view this chart as not that Bitcoin has gone up, but that the dollar has gone down.  That simply means people have more faith and confidence in Bitcoin than the US dollar.

Let that sink in for a moment.

When the War on Cash picks up again (it has been relatively quiet for a while), it would be no harder for the Fed.gov to outlaw Bitcoin than it was for them to outlaw gold in the 1930s.  The dream state for the central planners is for cash to not exist any longer - I wrote about this two years ago.  That way they could change the value of your money by the day if they wanted to.  Your life would be completely in their control.

I think it's Kevin at The Smallest Minority who has the phrase, "bad history is coming".  I think that's a good summary.