Enemies Inside the Gates

If you tend to assign credibility to Daniel Greenfield ("Sultan Knish") you'll find his article in Friday's Front Page Magazine disturbing.  I might dismiss a lesser investigator, but not Greenfield.  Hat tip to Mike Miles at  90 Miles From Tyranny for pointing this story out.

The point of the article?  That National Security Council head General H.R. McMaster is running an inside coup against President Trump.  Considering supporting reports today that he has "purged key Trump allies" inside the NSC, it appears true.

President Trump or General Kelly needs to get him out of there.

The former Army colonel had made his reputation by learning the lay of the land. In Iraq that meant sleeping on mud floors and digging into documents to figure out where the threat was coming from.

It was hard to imagine anyone better qualified to serve as President Trump’s top Middle East adviser at the National Security Council than a man who had been on the ground in Iraq and who had seen it all.

Just like in Iraq, Harvey began digging at the NSC. He came up with a list of Obama holdovers who were leaking to the press. McMaster, the new head of the NSC, refused to fire any of them.

McMaster had a different list of people he wanted to fire. It was easy to make the list. Harvey was on it.


According to the media, Watnick-Cohen was guilty of “anti-Muslim fervor” and “hardline views.” And there’s no room for anyone telling the truth about Islamic terrorism at McMaster’s NSC.

McMaster had even demanded that President Trump refrain from telling the truth about Islamic terrorism.

Another of his targets was Rich Higgins, who had written a memo warning of the role of the left in undermining counterterrorism.  Higgins had served as a director for strategic planning at the NSC and had warned in plain language about the threats of Islamic terrorism, of Sharia law, of the Hijrah colonization by Islamic migrants, of the Muslim Brotherhood, and of its alliance with the left as strategic threats.  He was fired for identifying a security threat to the US.  Kinda sounds like the whole point of the NSC, doesn't it?

McMaster forced K.T. McFarland out of her role as Deputy National Security Advisor.  If you've watched Fox News in the last 20 years, you'll recognize K.T..  She was an Oxford and Cambridge grad, worked on a Ph.D. at MIT, and had worked at the Pentagon for the Reagan administration.  Her replacement?  Dina Habib-Powell, an Egyptian-American immigrant and former Bush gatekeeper whose pals included Huma Abedin and Valerie Jarrett.


Habib-Powell had attended the Iftar dinner with members of Muslim Brotherhood front groups. You can see her photographed at the American Task Force of Palestine gala. The ATFP was originally Rashid Khalidi’s American Committee on Jerusalem. She was there as a presenter at the Middle East Institute after a speech by Hanan Ashrawi. Her achievements under Bush included cultural exchanges with Iran, as well as cash for the Palestinian Authority and for Lebanon after the Hezbollah war with Israel.

Cash for the Palestinian Authority, also known as "Pay to Slay" is one of her achievements?  That would be your tax money that they use to kill families celebrating the birth of a child or otherwise threatening no one.


As Caroline Glick has pointed out, the personnel being purged in the McMaster coup “are pro-Israel and oppose the Iran nuclear deal.”

When Adam Lovinger urged that “more attention be given to the threat of Iran and Islamic extremism,” his security clearance was revoked.  Robin Townley was forced out in the same way.

You probably noticed the story go by this week that:

Why does Susan Rice, who is alleged to have participated in the Obama eavesdropping on Trump people, need access to classified information? What national security purpose is served by it?

Nothing good can come from this.  "In my days", clearances were only granted on a basis of "Need to know".  According to that link and journalist Sara Carter, McMaster specifically said, “I hereby waive the requirement that you must have a ‘need-to-know’ to access any classified information contained in items you 'originated, reviewed, signed or received while serving,' as National Security Adviser,”.  In my book that's a big red warning flag emblazoned "WTF?".  Why should she need that clearance?   The best place for Susan Rice is far, far from anywhere important.

The purge of "America First" ideology is only starting.  Rumor is McMaster has a hit list.  You can bet that under his remodeling the NSC will be more like the way Obama would like it than what Trump supporters would like to see.  You can be sure that will include that the Iran Deal must stay, that Islam has nothing to do with Islamic terrorism, that we need to find ways to work with the aspirations of the Muslim Brotherhood, and that Israel must make concessions to terrorists. 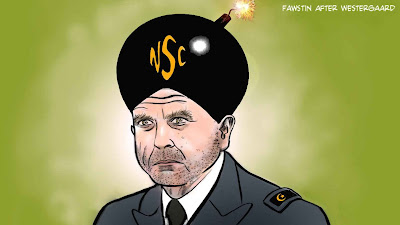 I think of myself as a reasonable guy.  I'd like to hear "the other side".  In a situation like this, where none of us can see the inside, there's always a risk that these events are being interpreted the wrong way.  On the other hand, there's a strong circumstantial case that Daniel Greenfield is right and this is the inside-the-beltway swamp fighting back and removing everyone that agrees with Trump and his supporters.  By coincidence, Derek Hunter at Town Hall had a column today "We’re Witnessing A Slow-Rolling Coup" about the media/Democratic Party complex in an active attempt to destroy the president and the results of the last election.

All of this goes together.  It's all the same story.

Posted by SiGraybeard at 8:10 PM