A Look at How Bad Hurricane Forecasting Is

Six days ago, Watts Up With That had post with a fascinating title:  "Hurricane drought to end? Models show Hurricane on track for East Coast".  Naturally, I had to look.  To my surprise, the intro to the post was a Tweet from Dr. Ryan Maue, a hurricane researcher I respect and have been following on these pages, since he was a student at Florida State University (earliest post?).  Naturally, I had to read it.


Hurricane season may ramp up a bit over the next 7-10 days w/action in southern Gulf of Mexico and in the far Atlantic w/Cape Verde system.

A 10-12 day forecast of a developing tropical storm off the coast of Africa is the next frontier of tropical weather forecasting in 2020s.

Both mesoscale hurricane models HMON and HWRF develop wave off Africa (Invest 99L) into a powerful hurricane in 5-days in open Atlantic.

The 8/5 WUWT post includes impressive simulated pictures of this tropical wave as a monster hurricane.  That peaked my interest, so I've been keeping on eye on it.   Here's the 2:00 PM update of the National Hurricane Center's Tropical Weather Outlook.  This storm is the yellow X on the right - the notation "1 (20%)" refers to this storm. 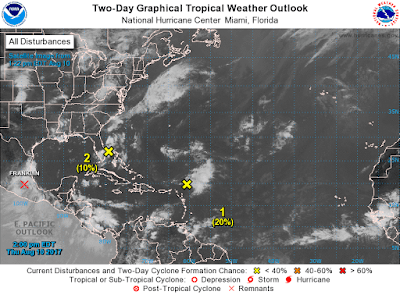 What I find interesting here is just how spectacularly wrong the model was.  Dr. Maue’s August 4th tweet said that two of the leading edge models, "HMON and HWRF develop wave off Africa (Invest 99L) into a powerful hurricane in 5-days in open Atlantic."  How well did they predict?  It’s six days later and 99L never became a powerful hurricane; it never even became a tropical storm.  It’s still a disorganized tropical wave with the NHC giving it a 20% chance of development in the next 48 hours, up to 40% chance within 5 days. The spaghetti runs show it re-curving out to the North Atlantic, staying a few hundred miles offshore.

It's hard to imagine how the models could be more wrong.  I suppose it could have dissipated, but that’s not much worse.

Remember Dr. Maue said A 10-12 day forecast of a developing tropical storm off the coast of Africa is the next frontier of tropical weather forecasting in 2020s.  I suppose this means we have to wait for the 2020s – maybe the late 2020s – because these results sure aren’t there, yet.  This is not to imply the models are hopeless, only that they're not done.  The only way they'll get better is if the model writers keep relentlessly looking at why they got things wrong and trying to improve them.
Long time readers may recall that last October, within 24 hours of closest approach, the NHC forecast Hurricane Matthew to be over my head as a Cat IV storm. Actual closest approach was about 50 miles away and a much weaker cat II. We didn’t get hurricane force winds. That’s an enormous difference in the risk from the storm, since wind damage scales as velocity squared.  I'd like to see them more accurate at 24 hours, let alone at 10 days.

Posted by SiGraybeard at 5:00 PM