From David P. Goldman at PJ Media in his article, "The Triumph of Inequality" (hat tip to Sense of Events):


The great divide is not between black and white, or male and female. We are turning into two races: Eloi who play video games and Morlocks who program them. The July 3 New York Times reported, "By 2015, American men 31 to 55 were working about 163 fewer hours a year than that same age group did in 2000. Men 21 to 30 were working 203 fewer hours a year...video games have been responsible for reducing the amount of work that young men do by 15 to 30 hours over the course of a year. Between 2004 and 2015, young men’s leisure time grew by 2.3 hours a week. A majority of that increase — 60 percent — was spent playing video games."

If you enlarge the definition of Morlocks from the people who program video games to the people who design the computers those games run on, and all the other engineers and technicians of all kinds: electrical, mechanical, aerospace, and more, I'm there with him.  I have as much respect for a mechanic who can keep a modern jet engine running optimally as the team who designed it.

Goldman goes on to draw a few contrasts.


Three hundred years ago, pretty much everyone knew how their technology worked. Europe had lived for a millennium on the innovations of the Carolingian Renaissance: the water wheel, the horse collar, and three-field crop rotation. Everyone knew how a water wheel worked. Water pushed the paddles and gears turned the millstones. Not everyone knew how a steam engine worked, but a lot of people did. The same applied to internal combustion engines.

Not only were those technologies easy to understand: They were easy to make. Any competent carpenter could build a water wheel. The Wright brothers built their first airplane in a bicycle shop. Henry Ford made his first internal combustion engine out of spare parts in a backroom at the Edison Illuminating Company of Detroit.

How many people know how a computer works? Solid-state electronics depends on quantum theory, which is understood by one in 10,000 Americans at best. To build a competitive integrated circuit now requires a multi-billion-dollar plant. A numerically minuscule elite invents the technologies we use every day, and a handful of large corporations access the capital required to manufacture them.

He argues that today's technology is too complex.  It's true that as recently as the early 1960s, only a couple of guys were required to design a state of the art radio, (I've met some of them) while today's equivalent radios require a team of hardware and software engineers, with each of those broad categories having several specializations.  It's the rare engineer who can understand all of those domains and design every piece.  To do so is discouraged in the industry for the simple reason that the product gets on the market faster when a team works in parallel than if one guy does everything one subsection at a time.

To dwell on this is to miss the big point: it's that "numerically minuscule elite" that leads all progress in our world and for a nation to have real influence, they need to ruthlessly select for them in a free market of education and ideas.  To deny the opportunity to compete for that education to some portion of its citizens is likely self-defeating, but only the best should advance. Meritocracy, not equality.


Today there are two billion Asians whose parents were immured in utter backwardness who now have a chance at the brass ring. China graduates four times as many STEM bachelors as the United States and twice as many PhDs; a generation ago the Chinese university system had just begun to pick itself up out of the ruins of the Cultural Revolution
...
Part of the glue that held the Chinese imperial system together these past three thousand years is the chance that every Chinese has to get rich by passing what used to be the Mandarin examination.
...
The byword in American education is "No child left behind." In Singapore, it's "You must be exceptional to survive."

America is at a distinct disadvantage to Asia.  We are numerically quite a bit smaller than China or India.  That means fewer to choose from to find that minuscule fraction.

While the idiots on the left are consumed with equality of outcomes for everyone, rather than the equality of opportunities, Goldman gives the simple, inescapably true message that we should ruthlessly search for excellence instead.


If we focus on equality rather than excellence, we will be overwhelmed by the rest of the world.  A generation from now there will be a word for an American who works for an Asian: "Employed." Our future lies in the talented few, not the mediocre masses -- and if we repudiate them, the future will repudiate us.

Are we headed for another dark ages?  Cloistered in the future equivalents of monasteries may be the people who know how to do things: the Morlocks.

A commenter there retold a story that I know I've seen before, and I'll bet most of you have, too.


I remember a story about how some archeologists excavated a Roman villa in East Anglia and found that while it was occupied by Romans soon after the conquest of Brittania it had all the comforts of civilization including central heating. As they continued to excavate they found strange burn marks in what was the great room which were accurately dated to a time three or four generations after the Romans left. Why the burn marks? Campfires. Within 100 years the people living there had forgotten how to make central heating work. They had probably forgotten that it existed at all.

Similarly, records kept by the Romans showed agricultural productivity for the same area three times what it would be when the Domesday Book started keeping records again. The farmers after the fall of Rome not only COULDN'T achieve that productivity, they didn't know it existed in the first place. 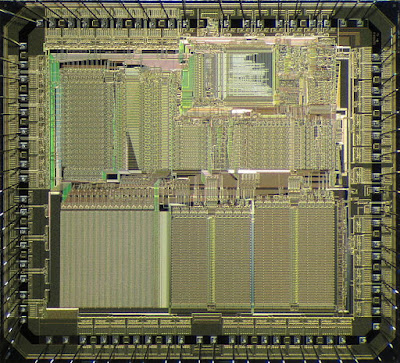 A modern generation Digital Signal Processor chip.  It takes the industrial might of billion dollar companies along with teams of engineers to design and make these.  If society collapses, I can easily see us losing the knowledge of how to make these.  I can see after a generation without them, people not being able to imagine they existed at all.