Federal Income Tax at an All Time High - Why is Anyone Surprised?

There was a headline last week that caught a bit of a buzz.  Business Insider reported it as, "Go Figure: Federal Revenues Hit All-Time Highs Under Trump Tax Cuts".  "Go figure"?  This is a business magazine writer?  I bet you regular readers figured revenues would go up last year, while that tax income was still being paid, just on economic principles.

There's an important point left out of that paragraph.  The Trump tax cuts didn't start until the second quarter of fiscal 2018, when calendar 2018 started.  That means the increased revenues aren't the full effect of the tax cuts.


But if you limit the accounting to this calendar year, individual income tax revenues are up by 5% through September.

Other major sources of revenue climbed as well, as the overall economy revived. FICA tax collections rose by more than 3%. Excise taxes jumped 13%.

The only category that was down? Corporate income taxes, which dropped by 31%.

That corporate income tax burden moved partially to the personal income taxes because (say it with me) corporations don't pay tax, they collect tax from their customers.  To the extent those corporations sold to Americans, I'd guess over 80%, their tax burdens were paid in US income tax.

One of the drums I beat all the time is that tax rates and tax revenues are not the same thing.  The classic example is Hauser's Law, after Stanford University professor Kurt Hauser, and as reported on these pages a bunch of times.  Here's a graph I've been using since 2012 (don't worry, it goes back to 1945, so it's not a big modification to leave out the last six years - here's a nice explanation from 2009) 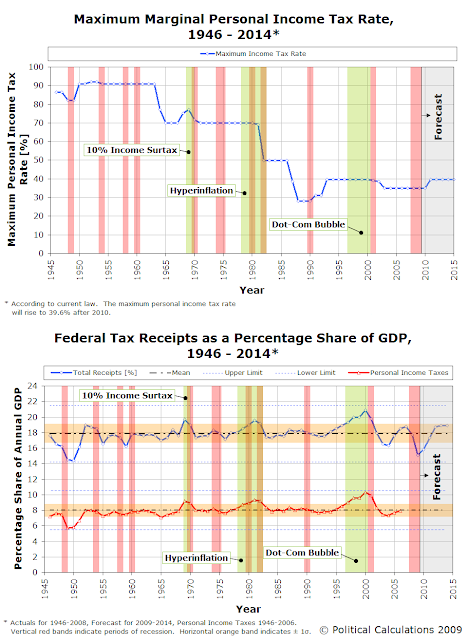 With a few short-lived exceptions, it's obviously true that tax revenues are essentially constant (as % of GDP), regardless of tax rates.  That can only mean that when taxes are higher, the GDP contracts.  The government doesn't collect any more money because there's less to take a portion of.  When taxes are lower, GDP expands and taxes take a smaller percentage of a bigger pie, giving the same percent of GDP as tax revenue.

It's election season (much like allergy season or painful rectal itch season) so you'll hear a lot of talk about various Republicans having passed "tax cuts for their rich buddies" or their "corporate benefactors"; just like (often times) the same idiots saying the solution to our problems is to raise the minimum wage, you just can't get through to people like this.

A few weeks ago, I swapped emails with a friend who was adamant about this.  As a fellow retired engineer, I thought he was better at math than his argument.  I said that I thought last years' tax cut was a pretty good attempt to try to target tax cuts for the middle class.  Since the upper incomes pay all the tax, giving even a tiny percentage cut to the rich will be bigger numbers than the amount given to middle or lower incomes - that's simple arithmetic.  I pointed out things like the lowest 50% of incomes pay 3% of all tax revenue, and the top 3% of U.S. taxpayers paid practically 90% of all taxes.  The top 1 percent paid a greater share of individual income taxes (37.3 percent) than the bottom 90 percent combined (30.5 percent).  The numbers of taxpayers paying most of the income tax become shockingly small. The top 0.1% of income tax payers, who paid more than the bottom 70% of the population combined, is just 1409 taxpayers.  Those 1409 people paid more than 98.7 million other taxpayers.

I posted this quote back in June of '17, but it really stuck with me and became one of those quotes I can't forget.  It really fits here.  It's from David Stockman, Reagan's budget chief, who said,

By the way, that "fellow retired engineer" I sent some of these facts to never replied to me again.  I told him I could find these facts online within a few minutes while typing the email and I'm sure he could, too.