I've had this story lingering around for several weeks and never gotten around to posting it.  It has to do with adapting common WiFi hardware to find bombs or weapons before an attack.


According to a peer-reviewed study led by researchers from Rutgers University-New Brunswick, ordinary Wi-Fi can effectively and cheaply detect weapons, bombs, or explosive chemicals contained within bags.

WiFi signals can be used to penetrate bags to get the dimensions of dangerous metal objects and identify them, including weapons, aluminum cans, laptops and batteries for bombs. WiFi can also be used to estimate the volume of liquids such as water, acid, alcohol and other chemicals for explosives, according to the researchers.


For their study, the researchers built a Wi-Fi weapon detection system that could analyze what happened to Wi-Fi signals as they encountered a nearby object or material.

When they tested their system on 15 types of objects and six types of bags, they found that it could distinguish dangerous objects from non-dangerous ones 99 percent of the time.

The author notes that if the material was in a backpack, the system could detect that object with a 95 percent accuracy rate.  If it was wrapped in something else before being put in the backpack, though, that figure dropped to 90 percent.

The intended application for this isn't airports, it's for public spaces.  Think the Ariana Grande concert bombing in Manchester, UK, in May of  '17 or the French Bataclan night club shooting in Paris in November of '15 or the Orlando Pulse Night Club shooting in June of '16.  Airports use X-Rays and other scanning devices, while concert venues are more likely to use security personnel manually searching bags.  The goal here is to use existing WiFi hardware to increase the effectiveness of the attempts to find bombs and other ways to attack. 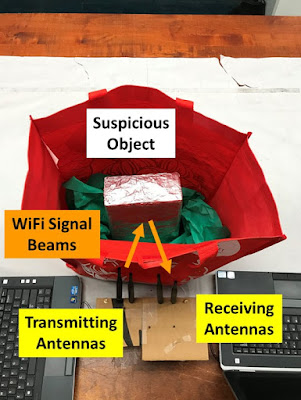 Rutgers University professor and paper co-author Yingying (Jennifer) Chen notes that, “In large public areas, it's hard to set up expensive screening infrastructure like what's in airports.  Manpower is always needed to check bags and we wanted to develop a complementary method to try to reduce manpower.”


This low-cost system requires a WiFi device with two to three antennas and can be integrated into existing WiFi networks. The system analyzes what happens when wireless signals penetrate and bounce off objects and materials.