How about 3D printed antennas.

For most amateur applications, certainly below 440 MHz, the consumer-end commercial printers aren't going to be big enough to print a full sized antenna, but printing pieces like insulators, or even plastic radiating elements that are spray painted with a conductive paint to make them conductive all seem to be within the capabilities of these printers.

The problem with low end printers is surface roughness.  Most of them work by hot filament extrusion and the prints often look and feel rough - the much more expensive stereolithography (liquid resin) printers produce a smoother surface.  At HF (2-30 MHz) through the VHF Ham bands (30-300 MHz), the roughness is going to be too small in terms of a wavelength to affect the performance of anything you print.  At higher frequencies, though, this sort of surface roughness can have marked effects on performance. 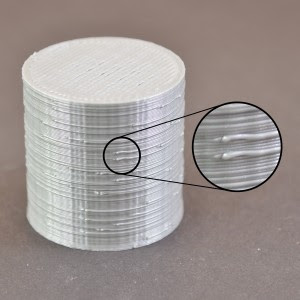 (Example of a lumpy, bumpy 3D filament print from Simplify3D.com)

A group of workers at Antenna Test Lab Co. ran a series of experiments on ways to improve the surface and measured how much the treatments helped the performance.  The results are reported by Microwaves & RF magazine.


To help RF/microwave engineers better understand the capabilities of antennas produced by 3D printing, Antenna Test Lab Company modeled printed, metallized, and tested a family of 15-dBi standard-gain horns for use from 2 to 40 GHz. The company is a professional antenna test laboratory with anechoic chamber (Fig. 1) to isolate antennas under test from outside RF/microwave energy sources and signals.

Some trial-and-error is involved in the process of producing and characterizing these antennas, especially over such a wide frequency range, but the benefits of 3D printing can be dramatic. For example, commercially available standard gain horns are typically quite expensive, with price tags ranging from $500 to $1500 depending on frequency range. Once the expense of learning how to print RF/microwave antennas has passed, compare those prices to the cost of producing a 3D standard gain horn at microwave frequencies for about $1.

$1 vs $500 to $1500?  Not many engineers will pass up that kind of savings.  They went on to print these standard-geometry horn antennas in a wide range of sizes to cover the frequencies they wanted to research.  Shown here: 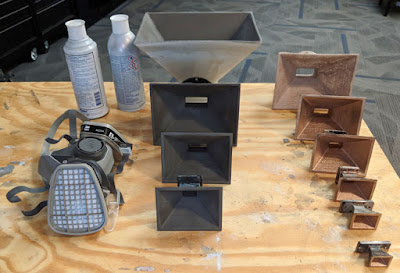 For size comparisons in your mind you can think that antenna in the background is about the size of a big salad bowl (or you could look at the respirator right front).  This antenna was printed in sections and glued together.  The smaller, higher frequency antennas were printed in one session.  All of these follow the same geometry and are only scaled in overall size to account for the different frequencies (their mounts were probably scaled as well).  The standard antennas have a standard gain, which is 15 dBi (15 decibels above a theoretical isotropic antenna that's perfectly omnidirectional; a decibel (dB) is a ratio of two numbers, 10*log (ratio) when dealing with powers or intensities).

As expected, they found that the printed horns acted like they were tuned to the right frequencies, but they had less gain: 5 dB instead of the expected 15.

That's when they decided to go after surface roughness.


Smoothing the plastic surfaces of a 3D-printed antenna is a necessary step in achieving the target gain performance from those surfaces once they are metallized. Sanding is one way to smooth the 3D layer surface roughness, but it’s time-consuming. The funnel shape of the horn also results in triangular facets that are enclosed and tapered, forming a surface that’s not practical for power sanding tools to work on.

After experimentation, it was found that “solvent smoothing” required the least time and effort with satisfactory results. Acetone is a useful and well-known solvent for ABS plastic prints, and it worked well with prints from a smaller ABS filament printer. The large-format printer uses only PLA filament, for which there does not seem to be a readily available solvent. Some research did reveal that dichloromethane (methylene chloride) was a candidate solvent for PLA plastic, and was found to be highly effective at softening and smoothing the plastic’s surface roughness.

Acetone is widely used as a solvent, it's still in nail polish remover, but methylene chloride is a bit more hazardous to work with.  It's a bit less common and the authors argue it's being phased out in favor of less toxic solvents.  They worked outside with gloves, respirators and full safety gear.

The combination of smoothing the surfaces followed by the conductive paint succeeded and the printed antennas more closely approached the ideal gain.  Yes, doing that work reduces the "$1 vs $500-$1500" differential we mentioned, but I'd believe it still represents a good savings.

It's worth noting that in their experiments, the nickle-based shielding (conductive) paint never performed as well as the other one they tested.


The nickel-based version of the conductive paint apparently exhibited several decibels loss at all frequencies, even following smoothing of the plastic horn surfaces. The silver/copper-based point, on the other hand, worked well to 26 GHz. From 26 to 40 GHz, the small horn exhibited about 3 dB loss (12 dBi gain) even when the plastic surfaces were smoothed by application of the solvents.

The 3-dB loss could be overcome by sanding the horn completely smooth with a small file, brushing with solvent, and recoating the surface with conductive paint. Since this Ka-band horn is only 1 in. in size, its soft plastic walls can easily be filed smooth in a manner of minutes. This extra smoothing step allowed it to achieve very low shorted aperture return loss while also reaching the expected 15-dBi gain when tested in the anechoic chamber

To sum this up, a 3D printer can be a useful accessory for making passive and radiating portions of an antenna.  If you're operating above "a few" hundred MHz, you might want to smooth the radiating elements with solvents or sanding - replace "you might want to" with "you'd better" if you're operating above about 2 GHz.  After smoothing, radiating structures should be painted with silver/copper shielding paint - this appears to be what they used.