According to Ars Technica reporting, aerospace/defense giant Lockheed Martin, known around here as "Lock-Mart, your one stop defense super store", has responded to a NASA request for proposal for a lunar lander, proposing a mega-version of the Lunar Excursion Module from the Apollo program.


The company's proposal for a "crewed lunar lander" is fairly ambitious. The 14-meter (46') single-stage spacecraft can carry up to four astronauts to the lunar surface, where they can stay for up to 14 days before the vehicle's engines blast it back into lunar orbit. This vehicle would be twice as tall as the Lunar Module used during the Apollo missions to the Moon nearly half a century ago. That vehicle carried two astronauts for short stays of no more than a few days.

"There is a lift elevator platform to get the crew down from the cabin to the surface," said Lockheed Martin principal space exploration architect Tim Cichan in an interview with Ars.

The lander would have considerable dry mass—22 metric tons—and would require an additional 40 tons of liquid oxygen and hydrogen fuel for its sorties down to the surface of the Moon from the proposed Lunar Gateway. The vehicle's preliminary design uses four modified RL10 engines, but other engines could be employed. The reusable vehicle could be re-fueled on the surface of the Moon or in orbit and should be capable of at least five to 10 flights.

Essentially twice the size of the Apollo LEM in every category.  Four astronauts instead of two; 14 days on the lunar surface instead of "a few", and a single stage rather than two with one left behind on the moon forever, giving this vehicle the opportunity to last "five to 10" flights instead of single mission.  An interesting point is that NASA didn't request a proposal for anything this big.


In March, the space agency solicited information from industry about medium-sized landers on the scale of 500kg, which could scale up to a 6-ton human-class lander. Lockheed's proposed lander is considerably larger than anything NASA has requested so far. "What we chose to do is jump to the end game," Antonelli said of the design.

At 62 tons instead of the "could scale up to a 6-ton" size, it really is a jump to the end game.  They say the lander is usable for a Mars landing with no modifications. 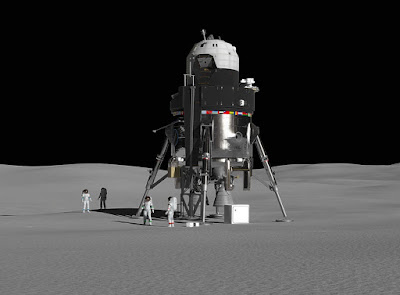 Anybody who read Heinlein's classic novel, "The Moon is a Harsh Mistress" knows the saying "TANSTAAFL" - There Ain't No Such Thing As A Free Lunch - and thinks of it as a law of space travel.  More precisely, it's a law of "life, the universe and everything" and space travel just happens to be part of that.  A lander this big can do a lot for you but that comes at a lot of cost.


There are some questions about this approach. One is that the vehicle would require a lot of fuel, 40 tons, all of which initially will have to be launched from the surface of Earth and transferred into lunar orbit. This would require a costly Space Launch System-class rocket launch all by itself. Alternately, the fuel could be launched to low-Earth orbit by smaller rockets and then be transferred with a solar electric power tug from there to lunar orbit. Eventually, if NASA and commercial companies figure out how to mine lunar water, this hydrogen and oxygen could come from the lunar poles.

Read that last sentence again: it says that it might not be as bad if humans figure out how to mine lunar water at reasonable costs.   This has been theoretically possible for quite a while, but nobody has demonstrated being able to do it in the hostile environment of the moon's surface at any cost.  Oh, and in that second to last sentence, "...transferred with a solar electric power tug..." - those tugs don't exist either.

NASA has said that it won't decide the "date and method" for a human return to the moon until 2024, so nothing is going to happen about this in the short term.  My bet is that nothing happens about it in the longer term either.  If we are ever to be able to reduce or eliminate the deficit, it's getting to be time for NASA to no longer be involved in this.  Yes, I think there is a place for NASA; in my mind, that place is new pure science and aeronautics research.  They're involved in too much routine stuff; see this comparison of the costs of the SpaceX Falcon Heavy and similar launch vehicles.  Most or all research flights should be unmanned.  There is room to learn better ways to live in space, but I think human spaceflight is largely understood.  I'm sure there are things left to learn, especially about deep space travel (beyond the moon), and I'm even more sure there are things to learn about habitats and colonies on the moon and planets, but that's something NASA and the private sector can work on together.