Hurricane Michael As A Worst Case To Consider

Some time during the mid '80s  or early '90s, after Mrs. Graybeard and I had moved into this house, the newspaper we got at the time (The Orlando Sentinel) published an article on a county Emergency Operations Center planning event.  The scenario was designed to tax the area's ability to respond to a worst case hurricane.  The scenario had the storm coming into central Florida from the east over open Atlantic to maintain strength the most until impact.  Then (IIRC) the storm slowed to a stop far enough off the coast to start lashing us with hurricane force winds while the hurricane intensified over the warm Gulf stream to chart-topping strength.  I think it intensified to a category 5 hurricane then came ashore slowly crossing the state east to west in the middle.

The projected destruction was mind blowing.  Virtually nothing along the barrier island - what locals call "beach side" - survives a direct hit from a Cat 5 hurricane.  Very little within 10 miles of the coast survives.  Even very few of the buildings and launch structures on Cape Canaveral Air Force Station and the Kennedy Space Center were said to be able to survive a category 5 storm with a 15-20 foot storm surge.  I thought that blockhouses designed to survive an exploding rocket falling on them would laugh off a little 160 mph wind; the EOC said otherwise.  Or said they didn't do well under 15 feet of water.

Long time readers might recall we caught a lucky break with Hurricane Matthew two years ago and had only tropical storm force conditions.  We had a Cat 1 storm conditions with Irma going up the other side of the state last year.  Before that, we had hits from Hurricanes Frances and Jeanne in 2004 (a few weeks apart) and Erin in 1995.  Going back to childhood, I lived through Cleo, Betsey and Donna.  Over the years, we've had more tropical storms than I recall because they're not really worth counting.  So I claim some level of "cred" when it comes to these storms.

Today's Michael is the worst case I can recall.  The thing only got named on Sunday the 7th, three days ago!  Yeah, the precursors were there a few days longer, but only us weather geeks who check the tropical weather every morning know that.  The vast majority of people who got hammered today probably heard about it on Monday.  Or yesterday.  They either heard "evacuate NOW" or "your preparations must be rushed to completion.  Tuesday evening was too late.  This morning the storm was starting and it was way too late.  Then the storm did the worst thing it could possibly due, it explosively intensified right up to the moment of landfall.  Early reports are calling it Category 4 with winds at 155, which is 2mph below the low end of Cat 5, and the third lowest central pressure in history.  It's truly a storm for the record books.

When I look at storms like this, I try to figure out what I can learn from it.  Would I stay or would I go?

The storm surge reports I've seen have been 9 feet or less, compared to forecasts of 12 feet.  Most of that is due to the shape of the gulf bottom helping the winds pile up the water along the shores of the panhandle east of Apalachicola.  One of the reasons I bought this house is that we drove around looking for neighborhoods that don't flood.  We're high enough above sea level that it would take much more storm surge to reach us.  Facing a cat 2 storm that everyone was saying should make 3, I would have stayed.  If I was on the beach a couple of feet above sea level looking at a storm surge higher than my house?  Aside from the fact I wouldn't live there, yeah, I'd get out.

What if I had known it would make it to the cusp of Cat 5?  I don't think I could have known that in time, because we would have needed to be out by Tuesday evening.  I probably would have stayed until this morning when it was too late to go and treated it more like something serious.  Maybe camp out in an inner hallway with a mattress in case the roof leaves. 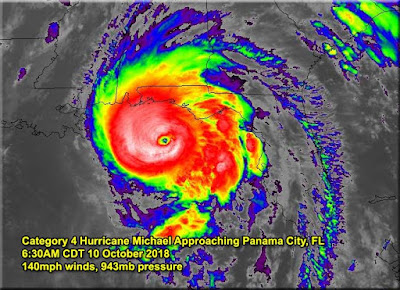