The Next Big Thing - HD Haptics

Haptic technology is around now.  Haptics is using technological means to cause physical sensations to a technology user.  The easy example is the use of a vibrating motor in your phone to tell you a message is there; it's a way of communicating back to the user through physical sensation.  The Wikipedia definition (first link) contains a pretty useful summary.


Haptic or kinesthetic communication recreates the sense of touch by applying forces, vibrations, or motions to the user.[1] This mechanical stimulation can be used to assist in the creation of virtual objects in a computer simulation, to control such virtual objects, and to enhance the remote control of machines and devices (telerobotics).

This is about what's coming.

Wired magazine used to have a meme for tech articles, where they would give a summary of some technology approaches saying the well known way was "tired", while the new advanced one was "Wired".   Electronic design puts a new spin on it with this lead into the article.


Tired: simple haptics that make smartphones vibrate with new message alerts.
Wired: haptic technology that recreates the sensation of pressing a physical key on a touchscreen.
Inspired: high-definition haptics that imitate the texture of a sweater’s fabric so that people shopping on their devices can feel before they buy.

That last one could shake the retail sector to its core.  One of the reasons Mrs. Graybeard and I go to brick and mortar stores to shop for clothes is to see what the fabric feels like.  If you could run your fingers over the screen of a phone or tablet and get an accurate simulation of the feel of that fabric, I can see massive impacts to the already-decimated local malls.

Perhaps you've seen the ads for places like MTailor that use an app to command your phone to take pictures of you.  Other services also say you'll answer a handful of questions.  They send you a custom tailored shirt - for roughly twice the price of your local department store's shirt.  Combine that with the high def haptics to feel the fabric choices and it seems like a combination that could take custom shirts made by using an app from a fringe small business to mainstream.

The company behind this is Boreas Technology, a startup company with 12 employees.


To recreate that touch sensation requires piezoelectric actuators that can generate a precise amount of haptic feedback. These parts are unable to function without large amounts of power, keeping them out of things like smartphones and wearables. But Boreas Technologies, a startup, introduced on Tuesday a high-voltage, low-power driver IC built from the ground up for these actuators. And it could help change things.

“The electronics required to operate these actuators has not been very efficient, preventing companies from using piezoelectric actuators in consumer products,” said Simon Chaput, chief executive and founder of Boreas. Changing that could move more responsive and realistic haptics into applications with power and thermal constraints. That could include not only smartphones and wearables but also home appliances and cars.

The market leader in drivers for these piezoelectric actuators is analog electronics giant Texas Instruments and Boreas is looking to capture parts of the market, which is expected to grow to $13.7 billion by 2022. Whether Boreas is the company that makes this reality or not is hard to say, but I think it's predictable High Definition haptics will succeed.  Between online shopping and gaming, both of which are among the biggest businesses, there will be plenty of push to make it happen. 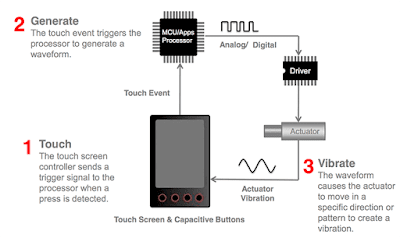