We decided to take a chance on the Neil Armstrong biopic First Man today, at the suggestion of a friend.  Here in the post-career phase of life, it's hard to say exactly which of two big influences in my life pushed me more in the direction of engineering: ham radio or being a space-geek.  Among my earliest memories in life is being herded down to the only classroom in my elementary school to watch Alan Shepard's first suborbital flight, and a little less than a year later herded to watch John Glenn's first orbital flight.

As a space geek kid, I thought I was fairly familiar with Neil Armstong's life, but there were a couple major things I didn't know.  I'm familiar with his NASA career highlights, just not familiar enough with Armstrong the man.   I wasn't aware that early in his career he lost a very young daughter and that it was hard for him to get past - as I think it would be for most of us.  The movie isn't "the life of Neil Armstrong", starting at childhood, it's about 8 years out of his life: roughly 1961 to 1969.  It opens with him doing a flight in the X-15 rocket plane while working as a civilian at Edwards Air Force Base.   According to an authoritative summary on Ars Technica


Of the 12 people who flew the X-15 airplane more than half a century ago, just one of the pilots is alive today, Joe Engle. He was a consultant on the film. (The film consulted with numerous astronauts, engineers, and historians to ensure accuracy when possible. There are some liberties taken, such as the clouds during the X-15 flight. These were needed to show the dramatic speed of the X-15, but the rocket plane would not have flown on such a cloudy day). Ars spoke to Engle on Thursday and asked him about the depiction of Armstrong's flight in the movie.

"I never had a launch day that turbulent," he said. "But I did hear from many people that that day was, by far, the most turbulent they had ever seen in the program at launch conditions." As for the exhilarating action scene, no, it doesn't compare to the real thing, Engle said. That was truly spectacular. However, he added, "I think it's as close as you can get."

"I think it's as close as you can get." is probably an apt summary for the movie.  I wasn't concerned with the whole daily outrage over the movie not depicting Armstrong and Aldrin planting the American flag; in the small print during that, most writers acknowledged that they showed the flag on the moon, they just didn't show the actual planting.  They also showed the ALSEP on the surface (Apollo Lunar Surface Experiment Package), but didn't spend time showing details of how that was deployed.  It seemed to me that they cut the film at the end.  The emphasis was getting to the moon.  It almost felt like it was fast-forwarded for the last few scenes on the moon and after their return.

I was concerned about the movie over-dramatizing things just to be more dramatic; perhaps ginning up fights or tension between Armstrong and his wife Jan.  One might think it's hard to over-dramatize space flight, but I'm aware of film and TV doing things to "make it more watchable".

Did they?  I think, yes, to some degree, but all in all it was a good movie.  IMO, they do a bit of over-exaggerated "shake the camera" in a few places so that it's impossible for the audience to see the panels and instruments.  At those times, they do things in the sound track to increase the tension in the movie; in other words, to manipulate us a bit.  Did they drum up tension between Neil and Jan?  No one that knows would tell, but the scenes between Ryan Gosling as Neil and Claire Foy as Jan grappling with the risks and reality of space flight come across as believable.  As an example, Ed White's wife Pat was the first person in Houston to welcome and befriend Jan; and throughout the start of the film you can see a closeness grow between the two couples.  The film barely touches on the personal devastation that Ed's death in the Apollo 1 fire causes but it seems it could be a contributor to the tension between Neil and Jan.

It's a good movie for space geeks and anyone interested in that period of history. 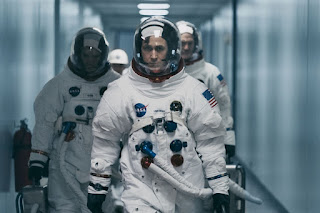