Shop Improvements In the Works

The battery adventure was a diversion from the real work going on for the next project.  I have some improvements in mind.   In what I see as the order to do them, they are:
Changing the front of the enclosure has been on my mind for the last several months.  The bi-fold doors are convenient and give good access to the mill's table, but they're only 25" tall.  If I walk up to the enclosure without ducking, the bridge of my nose hits the top rail.  I need at least another 6 or 8" clearance.  (In fairness, I built this to Hoss' plans and Hoss is in a wheelchair.  The relatively low top rail isn't an issue.)  I spent some time looking at other enclosures online and like the idea of doors that can slide out of the way.  I come up with something like this. 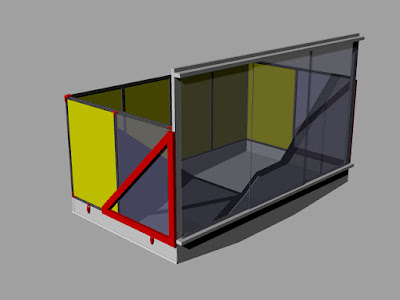 The new front would be framed entirely of 1x2 standard dimensional lumber.  The doors will slide in grooves routed in the top and bottom horizontal pieces, and will be able to slide past the ends, which will allow lots of access to the inside.  When the doors close, the center door will overlap the two side pieces to keep chips and splashes inside.

Moving to threading on the dedicated CNC lathe was something that re-occurred to me during the flame eater build.  I had to thread some small pieces; nothing I threaded was beyond the size capabilities of the Sherline.  When I built the CNC lathe, it was always intended for threading more than anything else, and after some trials and tribulations I was able to get a few test pieces threaded.  Unfortunately, that was 10 years and several garage re-organizations ago; it barely runs.  In fact, today I wanted to check some aspects of how it ran and it wouldn't run properly.  The cross slide (holding the tool) only moved in one direction, away from the chuck.  The motion to advance the tool into the work was fine.  It took a bit of troubleshooting to find out it was simply a connector that needed to be unplugged and replugged. 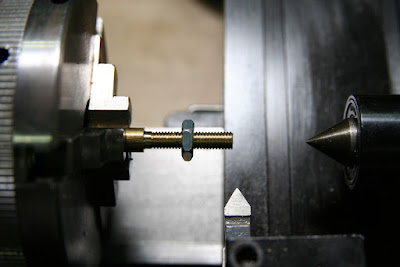 In the intervening years, the Sherline world has gotten more sophisticated, with high resolution position encoders and people driving their spindles with stepper motors for complete control of position.  I don't want to overcomplicate this, but I also want it to be dependable for little things like that wrist pin yoke I just made that 3 turns of a 32 TPI thread on it.


The spindle motor almost is lower priority because it works as it is, it could just be better (and I guess all of these improvements are like that).  Another aspect of the spindle motor upgrade is that a lot of guys update the power of the motor on the 704, because the rated 1 HP is a little light.  I don't mind that as much, but from what I see while getting familiar with what's out there, I'll probably end up in the 1-1/2 to 2HP size by the time I'm done.

Why double the speed?  I have a "speeds and feeds" program called G-Wizard; what that gives me is a good starting point for how fast I should spin the cutter (RPMs) and how fast the table should move in Inches Per Minute (IPM).  Virtually every time I cut aluminum, it tells me to set my spindle to as fast as it can go, giving me the warning that the spindle being maxed out is bad for tool life.  I think doubling the spindle speed will allow me to cut at RPMs less than the max.

I'm still contemplating the next big project, and I'm thinking of a simple internal combustion engine.  I understand they're less fussy than the flame eater.  I naively told Mrs. Graybeard that I'd like to make something like a single cylinder lawnmower engine.  There's a popular "first IC engine" by a guy named Webster who the engine is usually named after.