I think that was somebody's tag line in their commercials because I mentally hear some sort of jingle that I can't really recall when I read those words, but a web search doesn't reveal anything.   Being a small part specialist is probably claiming more credit than I should, but as I mentioned the other day, small parts are what I've been working on for the flame eater engine.  The threading problem was for one of these parts, on the left in this picture. 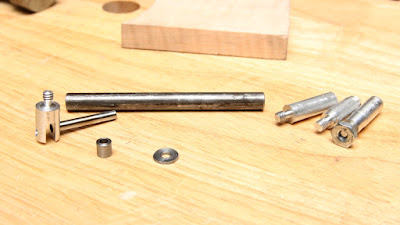 On the left is the wrist pin yoke with the wrist pin in one side.  The wrist pin is a 1/8" diameter steel pin, 0.91" long with a 3/32 hole along its long axis.  To its right is a little bushing 3/16" long and 3/16" diameter, then a custom washer.  Custom washers are something you only do when your other choices in the design force you; that one is made from the head of a big nail.  On the right are the three practice threading pieces that emulated the yoke until I was sure I could thread them.  In the back is the shaft that goes through the flywheel and holds the crank that drives the piston and all.  After this picture, I put a couple of small flats on the shaft where the three setscrews grab it.

The project for the last couple of days was to make the piston.  The book calls out "bronze, cast iron or cold rolled steel" - those aren't just three very different materials, they're three very different classes of materials.  If you go to buy bronze or CRS, at least, you'll need to specify the alloy.

The talk on modeling forums is that graphite is really a good material for the piston in this kind of engine.  In one of my oddest coincidences in years, while I bought a CRS rod for this task, I had a piece of graphite.  10 years ago, Mrs. Graybeard and I went to our first home machinists show, NAMES.  This is where I first saw a few engines like this one running, and after the show, I ordered plans from one of the people I talked with, Jerry Howell, along with a kit containing a 2" long piece of graphite just over 1.00" diameter. (Jerry has now passed away, but his little company lives on).

I had never machined graphite before and found conflicting advice on whether it could be made to same dimensions as the drawings, which called out a wall just under 1/32" thick.  One guy said he made the walls 1/16" thick, another said he left the piston solid except for slots to hold the push rod and pin, while a third said he thought he cut it to walls 1/32 thick.  I decided to leave the piston walls 1/8" thick.  Because reasons.  No particular reasons.  The only portion of the piston made exactly to the plans for a metal piston say is the middle cap where making it too thick would keep the three threads on the yoke from sticking through. 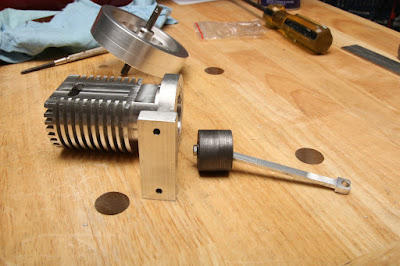 That's the piston after I turned it to match the cylinder. 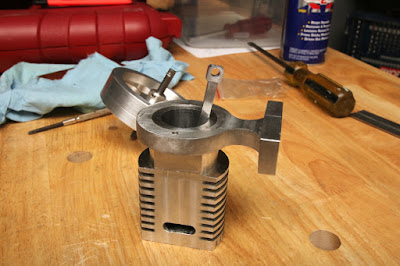 And this is the piston in its more or less final position.

I'm really not sure what percentage done this makes me, but there's a handful of very intricate little parts that have to be done.  I'll say somewhere around half done.

Posted by SiGraybeard at 5:13 PM