The title is a jab at the legislature; they'd like to pass such a law but clearly can't, so they did the next best thing: they've ruled a doctor can only prescribe three days worth of narcotic pain medication except for unusual circumstances.


Opioids: Physicians will be limited to prescribing a three-day supply for acute pain unless strict conditions are met for a seven-day supply. Physicians and pharmacists will also be required to consult the state's database to review a patient's history. Healthcare professionals also will need to take some courses on responsibly prescribing opioids.

Seems a ridiculous burden on doctors' offices - who seem to be pretty busy all the time, even here in small city USA.

Last July, I wrote a couple of pieces on trying to make sense of it all (first, second).  Aesop at Raconteur Report did a similar look in a few articles and came to more or less the same conclusions I did.  Short version: I think there's a deliberate attempt to conflate prescription opioid problems with illegal heroin overdose.  We don't have prescription drug problem, we have a "junkies shooting adulterated heroin problem".  So why the public ruse?  The old advise to "follow the money" leads me to the company that makes naloxone, the anti-narcotic drug administered to people in overdose.  It was being pushed that virtually everyone should carry it everywhere as a lifesaver; it was even pushed on librarians to have it available for the library junkies who OD while watching internet porn in the library (do you have that where you are?).  The price of naloxone had gone up 17x.  Going down that rabbit hole led directly to Hillary Clinton and the Obama administration.

But we have to "do something" - right or wrong - "for the children".  As I always say, if you don't ask the right question, you'll never get the right answer.

Another law they passed was to raise the legal age of marriage and put a legal limit on the difference in age between people entering a marriage.  I had no idea that was a problem so serious it demanded legislative attention.


Marriage: Anyone under 17 will not be allowed to marry. Anyone marrying a 17-year-old must be no more than two years older, while minors will need parental consent. The old law allowed 16- and 17-year-olds to marry with the consent of both sets of parents. There was no minimum age if a judge approved and a pregnancy was involved.

People whose mugshot was shown on a website or other public place and were not convicted have the right to get it taken down.


Mugshots: A person may request the removal of their arrest booking photo from a website or anywhere else where it can be publicly accessible if they were charged but not convicted. The law also prevents websites and publications from charging for the removal. Removal requests must be sent via registered mail and include proof of identification.

One of the things many of have been saying about this "we can't separate the illegal alien parents from their children" outrage is that we separate parents from their children all the time.  It's called breaking the law.  Whenever anyone goes to prison they're separated from their family.  Why should illegal aliens be a special class?  Florida passed a law along those lines that's one of those "I didn't know that was not already the way it's done" things.


Incarcerated parents: The Department of Children and Families will be required to involve the incarcerated parent of a child who receives child welfare services in their case planning and progress.

There are many more, and worth a look if you live in the state, just in case you need to check to make sure they didn't change something important in your line of work.  I just noted something that makes it seem the SJW contingent in the state is still pushing things.

and there's always time for the legislature to do the really important things: 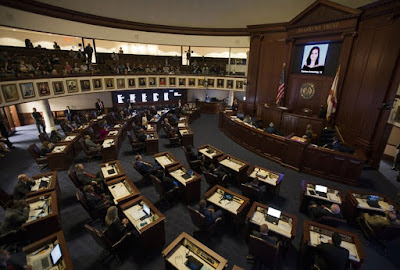