Everything is Proceeding as I Have Foreseen 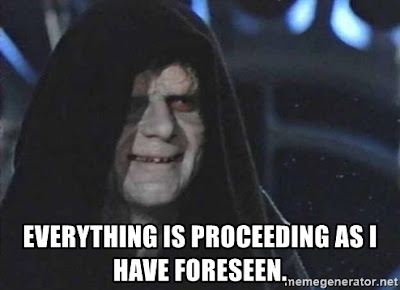 No knowledge of or ability with The Force required to make the predictions that the last 24 hours would unfold as they did regardless of who Trump picked for the Supreme Court.  It was obvious to anyone who observes the political kabuki theater that happens for virtually everything.  Gun Free Zone had this winner from before the announcement was made: 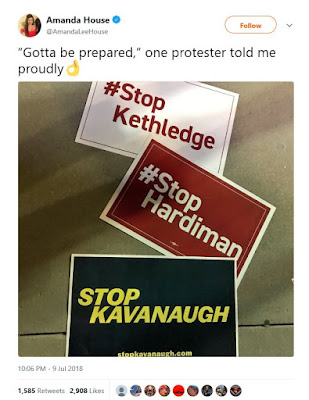 So Trump chose Kavanaugh.  Count me as a lukewarm supporter.  Yeah, he appears to have a good record on the 2A issues, big name pro-gun groups are supporting him, and on the other side the Demanding Mommies and others are all butt hurt about his nomination.  Not to disparage that; I really do care about his 2A stance.  The part that's sticking in my throat is that he's not as good on the 4th amendment, siding with NSA data collection on every-freakin'-body.  As a general rule, he seems to side with big government more than I'm comfortable with.  It would be wonderful, for example, if he was demonstrably against civil asset forfeiture, but I find no evidence.  He could be worse than Jeff Sessions for all I can find.

He appears to be a "safe pick" in the sense that while the outrage machine is doing their predictable "millions will die" act there's really nothing to base that on other than just general hate for anyone to the right of Che Guevara - or Bernie Sanders.  The common wisdom is that outrage machine will go to 11 for a while and Kavanaugh will be appointed to the court.