The restraining order from U.S. District Judge Robert Lasnik puts that plan on hold for now.

"There is a possibility of irreparable harm because of the way these guns can be made," he said.

If you want a copy of the files, Gun Free Zone has hosted one (as I'm sure tons of other people are doing).  Help yourself - I got mine.  They've only been available since about 2013, after all.

The pearl clutching going on over this ruling has reached levels that might possibly exceed Trump Derangement Syndrome.  I guarantee that these prints being available will lead to just as much blood in the streets as concealed carry has always been accused of: none whatsoever.  Miguel and J. Kb at Gun Free Zone have done yeoman's work at pointing out the stupid, but the base meme is that (to quote "actress" Alyssa Milano)


Imagine this: the convicted domestic abuser next door tries to buy a gun. He’s turned down because he fails his background check. When he gets home, he opens up his browser, and in half an hour he’s printing out his own undetectable, fully functional plastic gun, with no background check and no record of his purchase.

Half an hour?  Not bloody likely.  Half a week is more like it.

Milano shows a picture of a solid metal 1911 (you remember that one, right?) which is an absurd example undoubtedly used just to create fear.  Last time I looked, that's a half million dollar printer.  Your average gang banger or terrorist or whatever they're arguing just isn't going to drop half a million on a printer and spend the months required to get good results out of it.

The second meme is that these will be undetectable, plastic guns.  The pistol at the heart of this is the Liberator 2, which is printed ABS plastic.  Even a relatively high end home printer ($1500 class) is going to take a few days to print this.  According to his book Wilson left a metal firing pin in the gun specifically because of laws about undetectable guns brought about by the first use of a Glock in a movie.  Besides, in some places (like a barrel) strength can be gained by using a larger part.  Much like aluminum parts have to be bigger to perform like steel, plastic can work for the barrel if it's much thicker.  But there's not enough room in a handgun to make a firing pin out of plastic.  It would be bigger than the round!  The firing pins will show up on X-Rays.

Never one to be the second most stupid person in the room, Senator Richard Blumenthal (D - Uranus) takes the idiocy to 11 saying there will be fully plastic AR-15s taken onto airplanes and no one will ever know until someone shoots up the airplane. H/T for the meme to Gun Free Zone. 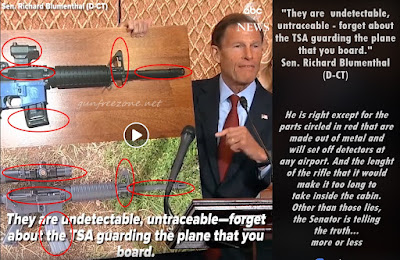 The serious side here is that Democrats are pressing the president to decree releasing the CAD files to be illegal and I have less than 20% confidence in the president's tendency to do the right thing.  This is the guy who walked around saying "ban bump stocks" a couple of months ago, and is breaking just about any conservative principle there is in this trade/tariff thing (bailing out farmers?).  In the last couple of days, I saw a video of him in what looked like a cabinet meeting, but with Jeff Sessions and some LEOs, threatening to destroy someone who's opposed to civil asset forfeiture, and it almost made me throw up.

EDIT: 080118 at 0710 EDT - Added photo that Blogger wouldn't let me add before original posting.  Reworded slightly around that.

Labels: big freakin' out of control government, commies and other idiots, gun control