A Radical Improvement in Electric Motors

Chances are, if you're like me, you've taken apart a motor at some point in your life.  I've thought every kid who had a slot car took apart a motor at least once.  At the least, you've probably seen inside a motor.  Either AC or DC as a broad brush idea doesn't matter, the coils of wire were likely wound something like this view of the stator (non-moving) portion of a motor. 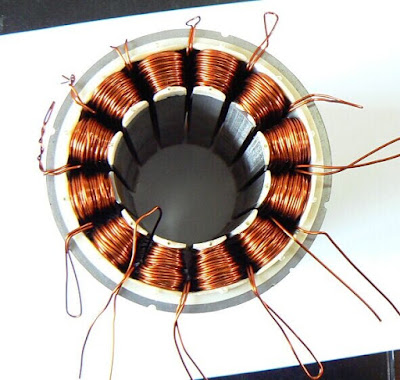 Because of the way current and magnetic fields are always at right angles to each other, these are called radial flux motors.  The magnetic flux is perpendicular to the axis of the motor, pointing in or out radially to the motor.  Unless you work on the leading edge of motors, this is probably all you've ever seen.

As is often the case, there's another approach to building motors that hasn't worked out as well in a practical sense in the past.  This alternative is called axial flux motors, and it's being advanced by a Belgian company called Magnax as covered in Machine Design news this week.  As the name implies, the magnetic flux is parallel to the axis of the motor.  Again, the concept isn't new, but there have been manufacturing cost and product design issues that have kept the approach in marginal roles in the market.  Magnax is saying they've improved on some of the known drawbacks to the method.  The axial flux approach, literally thinking at right angles to conventional motors, is leading to massive improvements in power density by reducing the size (and therefore weight) of the motors.


Magnax says the key to the high power density is its motors’ yokeless AF design with two rotors at each side of the machine. The yokeless AF motors have a shorter flux path, and permanent magnets are farther away from the axis, resulting in greater efficiency and leverage around the central axis.

Furthermore, thanks to the axial flux design, very little copper is wasted on overhanging loops on the windings. The motors have zero overhang; that is, 100% of the windings are active.

The motors are being targeted where the higher power density is the most sought after: electric vehicles; not just cars, but including motorized scooters and other mobility devices.  The same approach can be used in generators where they can reduce the weight of the generator in critical uses.  They're targeting wind turbines.


According to the company, a 100-kW axial-flux permanent-magnet (AFPM) generator for a mid-size wind turbine offers the following benefits:


I think the head to head comparison to an electric car motor is rather dramatic.  Magnax compares one of their motors to the motor BMW puts in their I3 electric car. 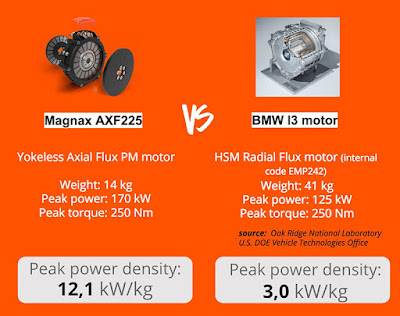 Note the 4x advantage in power vs. weight, which comes directly from the weight reduction.  The smaller motor weighs less, offers more peak power and the same torque as the motor BMW is using. The motor isn't a big contributor to vehicle weight, but every pound taken off the vehicle weight helps the range.

One of the things that strikes me as cool is that their design is easily scalable, and easy to parallel for more power output.  Look at this comparison to another generator technology.   That's three of their identical generator "slices" paralleled to increase output.

The MD article goes into lots of details on the comparison of radial flux (RF) to axial flux (AF) motors.  I've just barely excerpted highlights to whet your interest.