A Threading Problem on the LMS3540

The last couple of days of shop time have been centered around one of those small parts I talked about Saturday.  It's called a Wrist Pin Yoke, and it goes on the quarter inch end of that piston rod I showed the other day.   This drawing is missing an important detail, but gives you an idea of what it looks like. 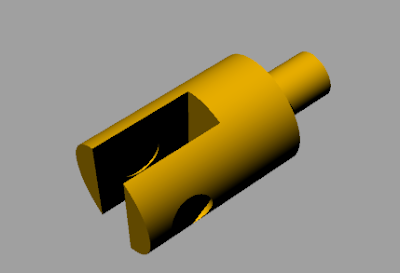 My original intent was to shape the part and then cut the threads with a die - I bought one of these to replace my Horrible Freight die which wouldn't cut anything back last October while working on my first engine.  The problem is that stud is too short to get more than about one turn cut - and it's a tapered die so it wouldn't cut that turn properly.

It seemed the thing to do would be to cut threads on my big lathe.  This turned into (so far) a three day long wheel-spinning marathon (so far!) that has not resulted in one successful thread being cut.  My lathe is a Sieg SC4 from Little Machine Shop, where it's called the LMS3540.  Going by the specs on the lathe, it can cut 6-32 threads with the proper selection of gears.  (There are two main ways of changing gears: some lathes have gearboxes and the gears are selected with levers or knobs or some way of picking the ones you want; in others, gears are changed by replacing one gear with another - this lathe is one of the latter).  There are four gears that are changed, and LMS includes a wide selection of gears that will allow you to cut up to 80 turns per inch.  This pic is from the lathe's user manual. 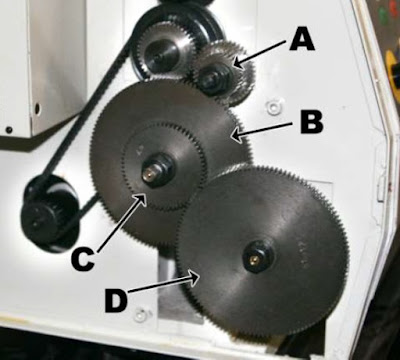 While working on my first engine, I used this capability to cut a 28TPI thread onto the 1/4" shaft, and did a practice 1/4-20, so while I hadn't changed the gears in a while, I knew how to do it.  This table (also from the user manual) showed there was one difference between the 28 pitch and 32 pitch: gear D, which goes from 70 teeth to 80.

When I put those four gears in, I couldn't get gear B into position to mesh with A.  There was mechanical interference with the drive gear (unlabeled, but at the top, left of gear A).  As an experiment, I went to the 100 tooth D gear used for a 40 TPI screw.  That one was so big that I couldn't get the B gear within about two inches of the A gear.  There's a while box visible in the upper left corner, a plastic enclosure over some electrical parts; the B/C gears hit that box and couldn't get past it.  It seemed the lathe can't cut everything they claim it can.

For those really interested in this, I did a diagnostic video showing the problems before I figured out how to get around it.  I won't embed it inline here because I don't think there's that much interest in it, but it can be seen here.

Web searches and searches of all the online machinist forums I subscribe to followed.  I found nothing about it not being to cut pitches above 28 - but I found that Sieg themselves says the SC4 can only cut 8-24 TPI threads.  That's quite a bit less than the 7-80 TPI range LMS has in the manual and doesn't include the 28 TPI threads I've already cut with it.

I enlisted Mrs. Graybeard, who has a good knack for fixing things, got her up to speed on what was going on, what I'd done, demonstrated the interference problem and then said, "tell me where I'm being stupid".  No luck.

Last night, just as I was shutting down the lights in the shop, I had a thought.  What if I put the parts "outside the box".  I figured I'd try it first thing this morning.  That was it.  It fits, and I think all the gear combinations will fit.  I cut one test piece to #8-32 to verify it was right and everything went as expected. 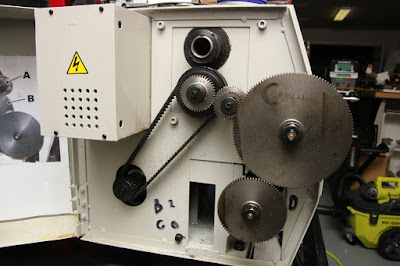 The drawback here is that I can't close the side panel and having that gear outside the enclosure is an ugly situation.  An exposed, moving gear on a 1.3 HP motor is not safe.  If I was a business, OSHA would shut me down in a minute.  If you look right above the big gear you can see the edge of the front panel that's got to be under 4" from the controls where my attention is riveted.  I could see a hand moving along that left panel, except for my finger being poised on the stop button and so won't be moving that way.  No long sleeves (it's summer - I have to run air conditioning to wear a short sleeve Tee shirt), no anything that could get caught in the gear and pull me into it.

I need some sort of field expedient cover for that.