The other day after the NATO talks in Brussels, President Trump said something that I thought was remarkable.  In response to a question about Vladimir Putin, Trump said in essence that Putin isn't an enemy or a friend: he's a competitor.  Putin is trying to make Russia great and Trump is trying to make America great.

As a guy who has envisioned Putin in a "Make Russia Great Again" hat for years, this naturally resonated with me.  Maybe it takes a business leader to look at people as competitors instead of enemies; someone simply after the same goals of wealth and power, but looking out for themselves.  Putin may be a corrupt ex-KGB officer and he may be worse thug than any Mafia Don to deal with, but he unapologetically says the worst event in the 20th century was the collapse of the Soviet Empire.  He's trying to restore the Russian empire, which goes back centuries.

I don't think I've heard such a rational statement from any American representative before.  Ever.  To get the details right - at least the details as reported by Time magazine:


Trump, who was in Belgium for a North Atlantic Treaty Organization (NATO) summit, cast his much-discussed relationship with Putin in a competitive light after a reporter asked Trump why he thinks the two leaders will get along ahead of their meeting in Finland next week.

“He’s a competitor. He’s been very nice to me the times I’ve met him; I’ve been nice to him,” Trump said, echoing comments he made earlier in the week. “Somebody was saying, ‘Is he an enemy?’ He’s not my enemy. Is he a friend? No, I don’t know him well enough. But the couple of times that I’ve gotten to meet him, we got along very well … but ultimately, he’s a competitor. He’s representing Russia. I’m representing the United States. It’s not a question of friend or enemy.”

You've probably heard the story about South Carolina State House member Katie Arrington's nearly fatal car crash back on June 22.  Well, nearly fatal for Katie, it was fatal for the drunk driver that hit the car she was a passenger in.  She was released from the hospital Friday, but is clearly not done recovering.  While she's expected to be able to walk again, she's still in a wheelchair for now.


Speaking from her home, the candidate said she broke both her feet in the crash, “demolished” her second vertebrae in her back, lost most of her small intestine, lost her right colon and ruptured her aorta.

“I was bleeding to death from my aorta. I have no neurological damage, and not a scratch on my face,” Arrington said.

That last one stands out.  As described, I'm surprised she's alive.

Chances are you're like me in not having heard of the very decent act of her opponent in that Congressional race, Joe Cunningham.


In the Congressional race Arrington is facing Democratic challenger Joe Cunningham of Charleston, who put his campaign on hold immediately after news of the crash. He has since returned to preparing for the Nov. 6 general election.

Cunningham even expressed he and his wife’s happiness for his opponent’s hospital release Friday.

“Amanda and I are thrilled to hear that Katie is leaving the hospital, and we continue to pray for a full recovery,” he said on Twitter.

Apparently, he returned to campaigning within five days.  Campaigning resumed with surrogates for Arrington, so (much like show business) the show must go on and it's understandable to me that Cunningham would resume campaigning.  Still, can you imagine any of the vocal "resistance" candidates acting with such decency?  Can you imagine a Maxine Waters, or any of the more well-known Democrats putting their campaign on hold, and not attacking while their opponent was down? I can't.  Unimaginable.

Hat tip to you, Mr. Cunningham.

My general attitude about pride in life is to be proud of your accomplishments; the things you've done that perhaps other people couldn't or wouldn't.  Things you have no control over, like your race or ancestry are just things that "are"; they're not worthy of pride, just acknowledgement.  Growing up in the south was my parent's idea, I had no part in it.  Staying in the small-town south was an active decision.  The way that Katie Arrington has been treated is yet another reason to be proud to be a southerner from flyover country. 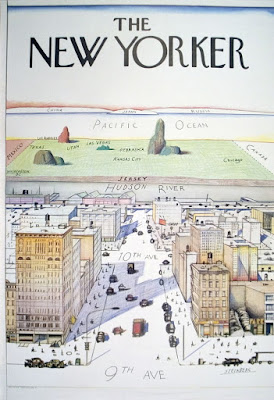 Years ago, the New Yorker ran this cover (I hope as self-deprecating humor), depicting a view of the world as seen from the city.   All detail stops at the Hudson River.  They're aware of a place called Jersey, and a few others, but it's basically nothing until you get to Pacific.  As good a metaphor for flyover country as you'll find.