That's the message from meteorologist Joe Bastardi at WeatherBELL Analytics, relayed by Watts Up With That.  For the next few days, you can go to WeatherBELL's site, click on Premium and then the ‘Saturday Summary’ video to watch his complete forecast.

We're not quite two months into the Atlantic hurricane season and it has been a bit of an odd one.  In May, before the formal start of the season, the first named storm of the year formed off the Yucatan on May 25.  Formally Subtropical Storm Alberto, it made landfall in the west Florida panhandle-Alabama border area as a moderate tropical storm and dissipated slightly thereafter but before the June 1st start of the season.

Since then, we had a Hurricane Chris which formed off the coast of South Carolina and lingered for most of a week before heading NE out to sea, slightly after Beryl, which formed just east of the Antilles. Beryl was briefly a tropical storm, even more briefly a hurricane, then dissipated into an unorganized mess south of Puerto Rico.  The mess was then pushed into the same general vicinity where Chris formed, re-formed and was re-named Beryl, and then headed NE and dissipated yet again.  (Confused?)

Joe's main point is that sea surface temperatures in the Atlantic have dropped dramatically in the North Atlantic basin, as seen in this plot comparing 2015 to 2018 (both plots on the same date in the year). 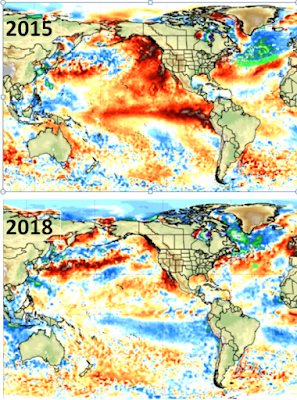 The color code is simple: red, orange and yellow are warmer colors, green and blue are cooler colors.  White is neutral.  Like virtually all of these sorts of maps, these are plots of temperature anomalies; departures from some long term average so the red "above average" indication in Hudson Bay in 2015 is much colder than the blue "below average" near the Yucatan.

The most vivid difference is the enormous absence of red and orange in the North Pacific and the El Nino in process in 2015 stretching across 3/4 of Pacific to the coast of South America (mostly Peru).  If you look at the arctic, you'll notice yellow and orange up there in 2015, while this year shows colder temperatures.  Another point Joe makes is that according to the Danish Meteorological Institute, the arctic temperatures have been below normal all summer.  But this piece is supposed to be about the Atlantic.

Returning to the Atlantic, then, there's a little orange in the Gulf of Mexico, more than in 2015, but much less orange off the SE than 2015.  You'll notice the Cape Verde waters off the west coast of Africa show orange in 2015 and blue this year - this doesn't seem to be a likely spot for hurricane formation if this stays.  The warmest places appear to be from the Delmarva Peninsula up through New England.  What Bastardi is concerned about is the area just east of North America, where cold and warm waters are close to each other.  From his comment to the article about his report on WUWT


I am pointing out the cold/warm configuration in the northwest Atlantic like that promotes higher than normal surface pressures as per the Euro seasonal idea over Southeast Canada into the north Atlantic, which is something I look for [to predict] landfalling, higher impact storms. What is vastly different is the Main development region from last, so not near as much production there.  But I think you will see and I point this out in the video ( please watch so I am not taken out of context) is what storms there are [become] more intense relative to averages further north than south. The current rotation of the MJO ( into strong 5 and 6) is not unlike 1981,1984,1989,1996.  Dennis, Diana, Hugo, Fran and Eduoard all had later season impact on the east coast. I showed on the video this morning how close the current pattern is with July 1960 (so much so I am concerned about a hybrid on the east coast this weekend ala Brenda July 27-30 1960) [Note:  some minor editing and formatting cleanup; most in square brackets - SiG]

If you've never watched Bastardi's hurricane forecasts, he's a big advocate of looking for certain big picture items, such as sea surface temperatures, the state of major oscillations in weather patterns (like ENSO, or the MJO), and the location of big semi-permanent pressure systems, then basing predictions on the kinds of weather that happened the last time the major features were the same.  It's the same philosophy as the observation that "history doesn't repeat, but it does rhyme".

In his video, he specifically mentions appropriate historically horrific storms, calmly showing memorial plaques that can be found in northeast cities now talking about these storms.  He actually almost sounded like what I said about NY Governor Andrew Cuomo after Hurricane Sandy: the people who act like these storms are new things there are either stupid - they don't know the history of where they live - or they're evil; trying to extort money because somehow they'll fix climate change.  There's a handful of storms that he names that are models for the kind of storm he's concerned about.

The problem with these storms, if I understand him, is that since the conditions for development are close to shore there will be little time for preparations.  They will spring up and be upon a city quickly or approach as a weak storm and explosively intensify.  A complicating factor is the geography: Chesapeake Bay, Long Island Sound, Raritan Bay and the mouth of the Hudson River; all these are places where wind driven water - the storm surge - piles up and gets worse.  The Great Gale of 1821 went up the same area that Sandy in 2012 did and was an astonishingly worse storm than Sandy.  The difference between them is that Sandy hit at peak high tide, on a full moon, the worst conditions possible for storm surge.  The "Great Gale of 1821" hit at low tide under a very different moon.  It can be calculated that the 11.2 feet of surge from the 1821 storm, if moved to the same tide and moon phase as Sandy, would have been 19.2 feet.  Sandy was 13.82 feet.   Or consider the 1938 "Long Island Express Hurricane".  If instead of sparing that area, it went over the mouth of the Hudson, you can imagine a storm surge of well over twenty feet surging up the Hudson River. That is practically a tsunami, and likely would reach Albany.

Of course, that's picking on New York.  The same sorts of things could happen in the Chesapeake Bay and wash out Baltimore or Delaware Bay and take out Philadelphia.  This is the kind of thing Joe Bastardi is concerned about and talks about in his video.