Something getting coverage around my blog list, but not much elsewhere, is the US Department of Justice essentially surrendering on its five-year-old case against Cody Wilson and Defense Distributed.   From the SAF press release:


BELLEVUE, WA – The Department of Justice and Second Amendment Foundation have reached a settlement in SAF’s lawsuit on behalf of Cody Wilson and Defense Distributed over free speech issues related to 3-D files and other information that may be used to manufacture lawful firearms.

SAF and Defense Distributed had filed suit against the State Department under the Obama administration, challenging a May 2013 attempt to control public speech as an export under the International Traffic in Arms Regulations (ITAR), a Cold War-era law intended to control exports of military articles.

Under terms of the settlement, the government has agreed to waive its prior restraint against the plaintiffs, allowing them to freely publish the 3-D files and other information at issue. The government has also agreed to pay a significant portion of the plaintiffs’ attorney’s fees, and to return $10,000 in State Department registration dues paid by Defense Distributed as a result of the prior restraint.

The case against DD was that they violated ITAR (International Trade in Arms Regulations).  DD argued they weren't exporting guns, they were publishing software describing something and publishing software has been recognized as free speech.  As part of the settlement, the DOJ has promised to eliminate ITAR control over the technical information DD had put online and transfer regulatory control to the Department of Commerce.

This is an outcome I never would have guessed at, but perhaps with a Trump DOJ instead of the Obama version and the very likely addition of a more pro-2A Supreme Court Justice, they felt they wouldn't win in the long run.


Significantly, the government expressly acknowledges that non-automatic firearms up to .50-caliber – including modern semi-auto sporting rifles such as the popular AR-15 and similar firearms – are not inherently military.

This is the Department of Justice saying AR-15s, AR-10s and similar semi-autos are not "weapons of war", as has been the anti-gun talking point/sound bite since, oh, forever.  In particular, it has been the war cry of the Hogg and the Parkland kids since day 1, as well as the reliably pro gun confiscation groups like the Mommies and Space Cadet.  I can't see how the DOJ could enforce a ban on ARs now, since they just established the precedent that they aren't military arms.

Defense Distributed is promising a new beginning to downloadable guns on August 1st, putting all of their files on a site they're opening called defcad.  Cody Wilson describes defcad as, "a GitHub for guns".  (Github is a software developers hangout and code repository - tons of open source projects are there). 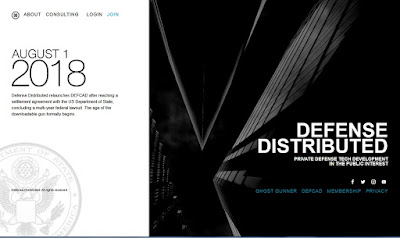 While metal printers are on the market, they're too expensive for the home market.  Plastic printers are available at a wide range of price points.  DD's Ghostgunner is apparently not available at the moment, but this dedicated CNC milling machine is supposed to be able to automatically find the critical points on an 80% AR lower (15 or 10) or an 80% 1911 and produce a finished receiver with minimal user input.  "At the click of a mouse" - which implies it comes with all the software needed.