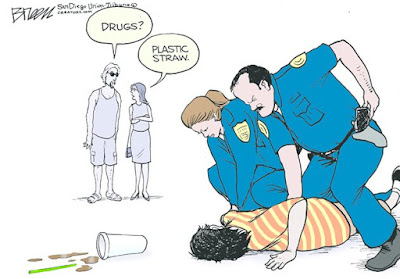 Since they've criminalized the use of plastic straws to the tune of $1000 fines and jail time.


Santa Barbara, by contrast, has banned even compostable straws, permitting only drinking tubes made from nonplastic materials such as paper, metal, or bamboo. The city also has made a second violation* of its straw prohibition both an administrative infraction carrying a $100 fine and a misdemeanor, punishable by a maximum fine of $1,000 and up to six months in jail. Each contraband straw or unsolicited plastic stirrer counts as a separate violation, so fines and jail time could stack up quickly.

Unlike other enacted or proposed straw bans, Santa Barbara's does not include an automatic exemption for the disabled, who often lack the ability to bring cup to lip. Restaurant owners can request an exemption based on medical necessity, but granting one is at the city's discretion.

Let's see, plastic straws from the entire US account for about .0002% of plastic pollution.  When you narrow it down to straws from Santa Barbara, it has to go down to parts per billion.  If there wasn't a single straw from the US, let alone Santa Barbara, I doubt if anybody could ever measure that.  Santa Barbara apparently not only thinks their imaginary pollution is a problem, as J.Kb at Gun Free Zone says, they feel that using a plastic straw is a worse crime than knowingly infecting someone with HIV/AIDS


To put that into perspective, a soccer mom with two juice boxes for her kids in the back of the minivan can be sentenced to the same amount of jail time as a person in Santa Barbara deliberately infecting another with HIV.

I get the impression that at least some people from California can't understand why the rest of the country thinks they're insane.  This is an example.  The most charitable thing that can be said about California is they're trying to get everyone to leave the state.  This law, they would argue, will just be for revenue enhancement; another chance to collect a kilo-buck from someone who can afford it.  I'll stick with what I said a few years ago: there are environmentalists who want to kill off 95% of the human race.  California governments: state, local and every level, appear to be trying to get rid of 95% of their population without actual genocide.