The news cycle continues to focus on New York City Socialist Twit of the Year, Alexandria Ocasio-Cortez.  I could never hope to top the fantastic, almost-poetic, snark-fest, hatchet job that Raconteur Report did on her.  A post highlighted by coming up with a different name for her at every mention: Evita Guevara-Castro one time, Ocarina-Piñata the next, Obrador Chavez-Maduro another, and more.  I could go on, but I shouldn't.  If you haven't read it, go read.  I'll wait.

Part of the hubbub has been a (likely staged) confrontation between Joy Behar and Megan McCain on the Spew and interviews with her socialist twit supporters with no relevant knowledge and even less ability to explain how the socialist policies could be paid for.  Behar annoys me by lying about "tax cuts for the wealthy", and McCain annoyed me for not correcting the lie.  I never watch the Spew.

I think Ms. Obrador Chavez-Maduro and those who advocate socialism should be sent to the land of the real Chavez and Maduro: Venezuela for a while, although I wonder if even living in real socialism could teach them anything.  Reuters reports that Venezuela is going to "remove five zeroes" from their currency, turning 500,000 Bolivar notes into 5 Bolivar notes as they attempt to deal with the expectation of one million percent inflation this year.


Venezuela will remove five zeroes from the bolivar currency rather than the three zeroes originally planned, President Nicolas Maduro said on Wednesday, in an effort to keep up with inflation projected to reach 1 million percent this year.

They report inflation is currently at 46,000 %.  With that current inflation, the "minimum wage" in Venezuela comes out to one US dollar per month.  Venezuelans simply can't buy food or necessities.   The predicted 1 million % inflation will put Venezuela's collapse in a league with the (also communist) Zimbabwe collapse of the 2000s and the 1920s Weimar Germany hyperinflation.

Maduro, Venezuela's leader, refuses to accept any blame for even a part of  the failure of their economic system.  Instead, it's due to other countries being mean to them.


The government has said it is the victim of an “economic war” led by opposition leaders with the help of Washington, which last year levied several rounds of sanctions against Maduro’s administration and a group of top officials.

The Blaze points out:

Maduro's reaction is, of course, just trying to preserve his power.  Economic sanctions against the country and specific political leaders have been an effect of, not the cause of, their economic mess.  The country is in economic free fall and people are getting out any way they can.  There's a full blown refugee crisis in Columbia, Peru, Guyana; neighboring islands like Curacao and Aruba; with some applying for refugee status in the US and others going farther south in South America.  I'm sure everyone has probably seen (or knows of) the video of a group of Venezuelans finding a cow that had gotten separated from others in a pasture and killing it for food. I've seen reports that there are no more stray dogs or cats in Venezuela. 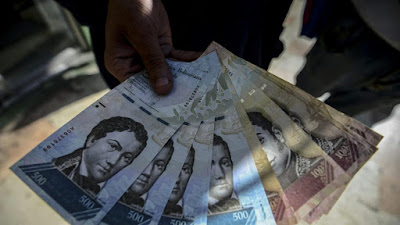 (500 and 100 Bolivar Notes - the old ones about to be replaced, but still usable as toilet paper. Getty Images).

This is socialism, Ms. Guevara-Castro.  This is what happens, time after time.  The so-called successful European socialist states aren't really that.  They're liberal democracies with high tax rates, and a rich uncle (us - the USA) who pays for some of their bills (defense).  If you took every single penny of income from the richest 1% in America, you couldn't run the government we have now for more than a few months - and you have no right to take all of anyone's income.  There isn't enough money do what you want to do.  It's not that "it works in a homogeneous society", as you'll hear.  It just causes misery, pain and suffering wherever it's used.

And please, God, please, don't give me the "socialism has failed because we haven't had the right people in charge" crap.  If it has never worked once in human history, what makes you think you're the one in 10 billion that can do it?  You sure don't have anything in your background or apparent IQ to recommend you for the job, Ms. Ocarina-Piñata.