A Bizarre Addendum to a Strange Story

Back in March of this year, former Russian Military officer and British spy, Sergei Skripal, and his daughter Yulia, were sickened in an what is always described as a Russian poison attack.  I assume you're familiar with the incident from news reports.  (Background of the incident).  Both survived the attack with what's called Novichok poison. Perhaps ironically, the only person to be killed in this attack was a British police officer investigating the attack.

Around the start of this month, a second Novichok poisoning made the news from the UK.  Two people who apparently had no ties to Russian or British intelligence were sickened, Charlie Rowley and his girlfriend Dawn Sturgess.  Miss Sturgess died.

Here's where it gets bizarre.  Mr. Rowley apparently found a bottle of liquid disguised as a perfume.  He gave it to Miss Sturgess who tested it and was sickened by it almost immediately.


The new revelation that there could be more Novichok in the otherwise quiet town comes as a man poisoned by the same agent several weeks ago near Salisbury told the press that he came across the nerve agent in a branded, cellophane-wrapped box containing a bottle he thought was full of perfume. The victim in that case, Charlie Rowley, 45, didn’t reveal—or remember—exactly where he had found the box. He said that on June 30 he gave it as a gift to his girlfriend, Dawn Sturgess, who recognized the branding on the box.

Rowley reported that he had put a pump dispenser onto the bottle, spilling some of the oily liquid onto his hands in the process. Although he said the liquid didn’t smell like perfume, he washed it off without thinking about it and gave it to Sturgess, his girlfriend of two years. The 44-year-old sprayed the liquid on her wrists and rubbed them together. Within 15 minutes, she developed a headache and went to draw a bath, Rowley said. He discovered her shortly after in the bath, fully clothed, and in a “very ill state.”

Both were later found unconscious and were hospitalized. Rowley has since recovered but Sturgess died from the poisoning over a week later, on July 8.

This is causing quite a bit of concern in the UK, as well it should.  The method of this poisoning was to disguise the poison as something that might be attractive to the target.  This seems more like a random psycho than a Russian state operation aimed at eliminating someone who spied on them.  Unless, perhaps, this is how the nerve agent is transferred from Russia to their agents in the field and somehow the Russian agent/assassin lost it, or never got it.  Somehow the transfer went wrong.


British officials determined that the Skripals were likely poisoned after a would-be assassin smeared the nerve agent on the front door handle of Mr. Skripal’s home. It’s unclear how or why Rowley and Sturgess came into contact with nerve agent, however. British officials reported that there was nothing in their backgrounds to tie them to Russia or suggest they were targeted. Investigators are looking into whether they simply accidentally came across remnants of the batch of poison used in the Skripal attack. Thus, they may have been inadvertent victims from discarded or lingering nerve agent—a possibility likely to put residents on edge. [Note - the piece this is quoted from is dated July 5th; the piece explaining about the disguise as a perfume box is from July 26, three weeks later.]

It leaves a very obvious, very large question hanging.  Is there more?  Are there more "branded, cellophane-wrapped boxes", boxes made to look like a perfume that people will recognize, around the UK?


"What we can't tell, and probably will never be able to tell, is actually is there anything else out there," Deputy Chief Constable Paul Mills, of Wiltshire Police, said during a press briefing Wednesday. "So, all we can do is be intelligence-led… and be meticulous with the searching," he added. 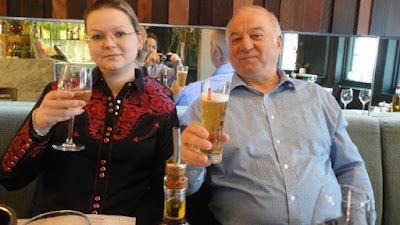 Sergei and Yulia Skripal.  After what you've been through, raise a glass and enjoy.  Have one for me, too.