I haven't posted on the shop project for a while, because things have been a bit ... scattered.

I had to do a maintenance/repair task.  One of my sheet rubber Y-axis covers had split along a place where it gets compressed - folded - when the table is all the way toward the Z column.  I bought a new sheet of rubber, this time 3/32 instead of 1/16, and then had to make a new sheet metal bar to fasten the rubber to the table because the OEM plastic piece was breaking.  Falling apart, actually.  You can't see it, but it's on the right, under the fold where the rubber goes downward at the table. 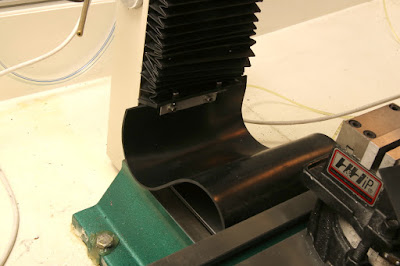 This took longer than it should have because of just one silly goof up after another.

The main effort was to make the next part for the Duclos engine, the valve.  Duclos does a kind of funky arrangement where the valve just slides on the flat side of the cylinder I milled.  (Visible here)  The valve gets clamped to the side with a bent-up sheet metal spring.  He cuts a slot in the valve with slitting saw, but due to the small size of the part, uses a 1" diameter saw blade.  I don't have anything that small and it's so much smaller than the saw blade holder I have for the big mill, the teeth would be inside the holder.  Time to switch to the Sherline CNC mill.  That slitting saw holder is 1" diameter, but could be turned down 1/16 or so.

My attempts to find a saw blade didn't go well.  The supplier he recommended doesn't exist anymore, and the company that bought them out had one blade that was $95.  For a single use?  I'll keep looking.  I eventually had to settle for a 1-1/4" blade a little thicker than he recommended from Travers Tool.  That took until Wednesday to get here.

I cut the slot out yesterday, using my Rumblepad hand controller to advance the blade .001" at a time into the work.  110 button pushes, if you're interested.  I didn't count, I watched the Digital Readout of position in Mach3. 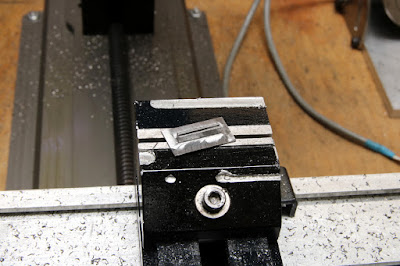 Some of you might not think of the Sherline for making things out of steel, but it's very good at fine work like this and steel isn't a problem.  I've cut titanium on it, it's just a matter of getting the "speeds and feeds" right - the depth of cut, speed of the spindle and inches per minute the cutter moves.  Unlike the bigger mill with its 1HP spindle, where I might have cut it in a couple of passes, the Sherline has about a 1/10HP spindle, so I cut it in .010" thick passes.  Which is why we have CNC, that doesn't get bored and lose count of where it is.  It just follows the code you write.

There's a couple parts coming that are almost absurdly detailed.  Remember my flywheel?  There's a cam roller to be made that looks like that 3-3/8" diameter flywheel but will be 1/2" diameter.  Instead of 3/4" holes, it gets 3/32" holes.  A Sherline job for sure.  In fact, the rest of the engine until I get to the mounting plate may all be Sherline jobs.   It's all small, fiddly bits.