A Safety Cover for the Threading Gears on the LMS3540

In my post about threading problems on Tuesday, I showed the way I was able to get the gears to thread 32 TPI and finer - putting the gears into a position that I can't close the cover over.  I concluded with the statement that


I need some sort of field expedient cover for that. 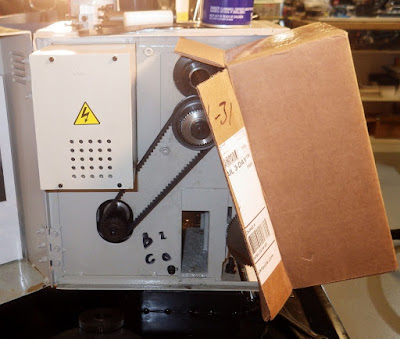 Yes, that's a Mark I, Plain Ole Cardboard Box.  One of the top flats is folded over into the box, and that side gets wedged behind the lever that holds the B/C gears, so the box stays put while everything is turning.  It stops my fingers if they drift over that way.  It'll do for now.

After that post on Tuesday, I started making some practice pieces preformed to the general shape/length of the real part and threaded 6-32.  Ruined the first two I made (I don't remember why), then got one right.  On the second preform for the piece I need to make, I think I lost count of where I was and moved the cutter too far into the thread and it sheared the stud off.  Then the third and fourth worked the way they should.  3 out of 4 isn't too bad, so time to move onto the real part.

It threaded just fine.  There are still two operations to do it: cut the slot in the back for the push rod and then drill across the slot for the pin.

I'm going to do this on the Sherline, but today has been a day of no progress.  The shop computer forgot how to boot and the fan suddenly sounded loud and obnoxious.  It has been behaving like the motherboard battery was on the verge of dying, and it apparently lost its mind.  For weeks or months, it would forget the date & time if I turned off the power strip.  If the power was on, it held up the clock.  So I pulled the covers, replaced the battery and it remembered its setup information.  Including the time.  Then it was time to put the air compressor to use blowing out dust.  Messy, but necessary.  Everything looks like it will be back to normal tomorrow.