It's Looking Like Falcon Heavy Was A Successful Product Launch

Since it was so visible from my backyard, I naturally covered the maiden flight of the Falcon Heavy launch vehicle.  A couple of weeks later, I covered a review of the "heavy lift landscape" on Ars Technica that became one of my top 10 most popular posts.

I say this so newcomers to the blog know I've been on the story for a while.

This week, ARS Technica reports that the Falcon Heavy seems to have caught on well with its intended customer base.  Part of that, I'm sure, is because (as ARS put it), "The Falcon Heavy is an absurdly low-cost heavy lift rocket". The other part seems to have something to do with the flamboyance of America's Favorite Huckster, Elon Musk, and the first mission which famously flung a Tesla roadster into solar orbit.

It's easy to forget that when the rocket first launched, the critics were saying that the company's Falcon 9 rocket had become powerful enough that it could satisfy the needs of most commercial customers, and that, "The Falcon Heavy is just a vanity project for Elon Musk."  It's as if the critics never expected customers to sign up for the big rocket.


At the time, the rocket only had a couple of launches on its manifest, including the six-ton Arabsat 6A satellite for Arabsat of Saudi Arabia and the Space Test Program-2 mission for the US Air Force. However, since that time SpaceX has seen the rocket certified for national security missions by the US military and has signed several additional launch contracts.

Last week, the Swedish satellite company Ovzon signed a deal for a Falcon Heavy launch as early as late 2020 for a geostationary satellite mission. And just on Thursday, ViaSat announced that it, too, had chosen the Falcon Heavy to launch one of its future ViaSat-3 satellite missions in the 2020 to 2022 timeframe.

Both Ovzon and ViaSat cited the ability of the Falcon Heavy to deliver heavy payloads "direct" - or almost directly - to geostationary orbit.  The Heavy's ability to do that direct-to-geostationary-orbit profile was the hidden meaning of the test flight.  The thing is, it didn't have to be the red Tesla, glitzy launch it became.  NASA was offered a more or less "free" launch if it wanted something delivered into deep space, but they had to follow the mission profile itself, which was a test flight.  That first test flight could have launched another mission for NASA and not the red Tesla/Starman publicity stunt.


On the day before launch, SpaceX founder Elon Musk explained that the rocket would demonstrate the capability to send payloads directly to geostationary orbit by firing its second stage after a prolonged shutdown during which the rocket would coast. “The six-hour coast is needed for a lot of the big Air Force intel missions for direct injections to GEO,” Musk said.

The ability to do the six hour coast, about twice as long as the longest coasts the Falcon 9 rocket has ever made, was absolutely not lost on the satellite industry.  It was watched closely, as you'd expect it would be; we are talking millions of dollars in cost impact to these companies, after all.


This turns out to have been a shrewd move. The demonstration flight of the Falcon Heavy apparently convinced not only the military of the rocket's direct-to-geo capability but satellite fleet operators as well. The Falcon Heavy rocket now seems nicely positioned to offer satellite companies relatively low-cost access to orbits they desire, with a minimum of time spent getting there in space. 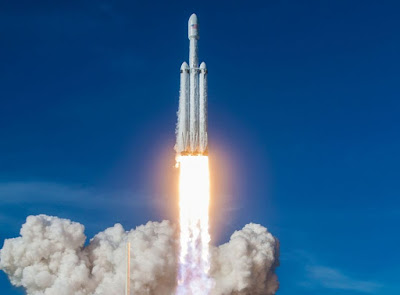