There's a quote attributed to Milton Friedman that goes, “if the government were to take over the Sahara Desert, there would be a shortage of sand in five years.”  There's some dispute over that (there seems to be dispute over virtually every famous quote), but the sentiment is right on. It's a wonderful description of the ineptness and incompetence of the big governments.  It has been used to describe the Soviet Union, Sweden and Dubai - and I'm sure that's just the ones the quote reference found.

In this case, FEE.org points out that poverty in the US had been in decline for 20 years, from 32.1% the end of WWII to 14.7% when LBJ started his famous War on Poverty in the State of the Union speech of 1964.


Since 1966, the first year with a significant increase in antipoverty spending, the poverty rate reported by the Census Bureau has been virtually unchanged…Transfers targeted to low-income families increased in real dollars from an average of $3,070 per person in 1965 to $34,093 in 2016…Transfers now constitute 84.2% of the disposable income of the poorest quintile of American households and 57.8% of the disposable income of lower-middle-income households. These payments also make up 27.5% of America’s total disposable income.  [Emphasis added: SiG] 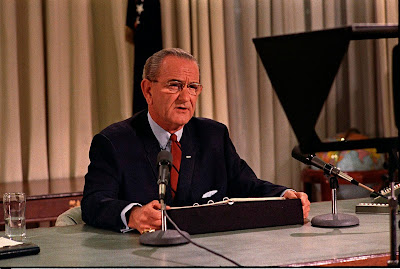 The FEE article is by Daniel J. Mitchell, who's a good guy to read if you're interested in smaller government and free market economics, both of the subjects here.  The article gives large chunks of text to different authors with extended quotes, like I'm doing in quoting his piece, so it gets a little messy to keep all the attributes in place.


The stated goal of the War on Poverty is not just to raise living standards but also to make America’s poor more self-sufficient and to bring them into the mainstream of the economy. In that effort the war has been an abject failure, increasing dependency and largely severing the bottom fifth of earners from the rewards and responsibilities of work…The expanding availability of antipoverty transfers has devastated the work effort of poor and lower-middle income families. By 1975 the lowest-earning fifth of families had 24.8% more families with a prime-work age head and no one working than did their middle-income peers. By 2015 this differential had risen to 37.1%…The War on Poverty has increased dependency and failed in its primary effort to bring poor people into the mainstream of America’s economy and communal life. Government programs replaced deprivation with idleness, stifling human flourishing. It happened just as President Franklin Roosevelt said it would: “The lessons of history,” he said in 1935, “show conclusively that continued dependency upon relief induces a spiritual and moral disintegration fundamentally destructive to the national fiber.”  [Emphasis added - SiG]

I find it interesting that even FDR realized that the lessons of history show that dependency on relief  destroy the national spiritual and moral fiber.  It's almost as if he read Ben Franklin (1766)


“I am for doing good to the poor, but I differ in opinion of the means. I think the best way of doing good to the poor, is not making them easy in poverty, but leading or driving them out of it. In my youth I travelled much, and I observed in different countries, that the more public provisions were made for the poor, the less they provided for themselves, and of course became poorer. And, on the contrary, the less was done for them, the more they did for themselves, and became richer.”

The problem with providing 84.2% of the disposable income of the lowest income quintile is the perverse incentives it provides for people to not do anything to improve their lot in life.  If they do improve themselves, their taxes go up and their disposable income goes down.  It's the Welfare Cliff.  That linked article is over four years old, but it shows in graphic form as well as numbers that a single mom is better off with a $29,000 job and welfare than taking a $69,000 job!  A quote in the FEE article updates the numbers a little but the conclusion is roughly the same.

Welfare programs have constructed a trap there's no way out of.  Who wants to go to school nights, probably while raising kids, and basically turn themselves inside out for 8 to 10 years, only to find their new pay rate drops their welfare benefits and they would have done better financially just sitting home and taking the welfare checks?

How do you get rid of this?  Mitchell (at FEE) reports:


Folks on the left think the solution to high implicit tax rates (i.e., the dependency trap) is to make benefits more widely available. In other words, don’t reduce handouts as income increases.

The other alternative is to make benefits less generous, which will simultaneously reduce implicit tax rates and encourage more work.

Of course, making the benefits less generous would lead to large scale screaming and protests from both the Free Shit Army and their government enablers.  Not to mention every invective known to man will be thrown at us - plus a few never-before-heard insults.  Hater.

It's an axiom as true as any that you get more of things you subsidize and less of things you tax.  The open, free market was reducing poverty for 20 years until the War on Poverty started subsidizing it.  There has been no progress in 50 years.

Mitchell included a link to his blog, where he included this helpful diagram to show just how the Federal Welfare state works.  Get out your magnifiers and have fun! 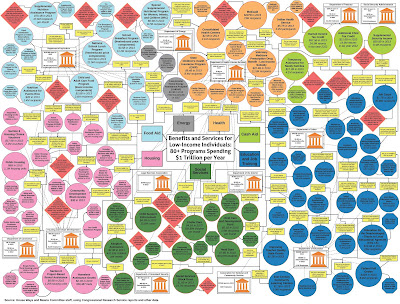