I'm About Sick of Politcians Talking About Income Inequality

"Income inequality" is just one of those terms that doesn't seem to have any formally-agreed upon meaning, and is primarily used to inflame class envy.  The term seems to have a poorly-concealed core belief that all income should properly be given to the Glorious Motherland to distribute equally.  Once they take their cut off the top, of course.  The Motherland always gets their cut.

Pretty much every Democratic party candidate I can see is running on some version of claiming they'll do something about income inequality, like our Dem Soc gubernatorial candidate Telehassle Mayor Gillum.

Well there are definitions of inequality, they just don't mean anything.  They don't give us any tools we use to answer the big questions:  (1) is it a real problem?  (2) is it something that can be fixed?  (3) is the cost to "fix" the problem worse than the problem?


Income inequality is the unequal distribution of household or individual income across the various participants in an economy. It is often presented as the percentage of income related to a percentage of the population. For example, a statistic may indicate that 70% of a country's income is controlled by 20% of that country's residents.

My response to that might well be, "So what?  How do I know those percentages aren't right?  What should they be?"  I might even say, "I should hope there's income inequality; why should I expect a daycare worker, plumber or taxi driver to make as much as a surgeon?"

Here's the big problem.  Since income inequality isn't defined precisely, it's easy to manipulate methods to get whatever results the person complaining about inequality wants.   For example, how many times have you heard that the only growth in the economy has gone to the wealthy?  This is an argument exemplified by Thomas Piketty, Emmanuel Saez, and Gabriel Zucman, in the Quarterly Journal of Economics, December 2016.  Russ Roberts takes on this subject in the online magazine Medium.


They write, “Looking first at income before taxes and transfers, income stagnated for bottom 50% earners: for this group, average pre-tax income was $16,000 in 1980 — expressed in 2014 dollars, using the national income deflator — and still is $16,200 in 2014.”¹ Piketty, Saez, and Zucman also found that incomes of the top 1% tripled over the same time period.

What that statement implies is that we're looking at the same group of people 34 years later, and they're both working the same jobs and making the current pay rates.  It's comparing a snapshot of the pay rate for people in that income slice in 2014 from one in 1980.  In 34 years, lots of things will have changed, including both people dying and no longer being in the sample, and jobs being obsoleted.  More importantly, after 34 years, it's highly likely the 1984 workers have children that are now in the income distribution.  The important part is that these samples are not the same people. Their statistical method is just looking at pay rates and ignores upward mobility.


Studies that use panel data — data that is generated from following the same people over time — consistently find that the largest gains over time accrue to the poorest workers and that the richest workers get very little of the gains. This is true in survey data. It is true in data gathered from tax returns. [Bold added: SiG]
...
This first study, from the Pew Charitable Trusts, conducted by Leonard Lopoo and Thomas DeLeire uses the Panel Study of Income Dynamics (PSID) and compares the family incomes of children to the income of their parents.⁴ Parents income is taken from a series of years in the 1960s. Children’s income is taken from a series of years in the early 2000s. As shown in Figure 1, 84% earned more than their parents, corrected for inflation. But 93% of the children in the poorest households, the bottom 20% surpassed their parents. Only 70% of those raised in the top quintile exceeded their parent’s income. 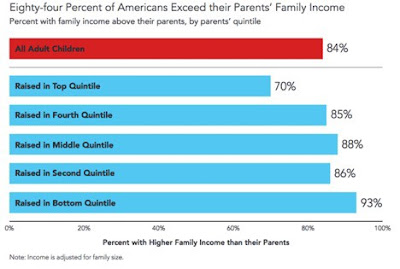 When looked at as tracking people and not comparing "classes" in society, the results are completely different than the first paper.  We find that the bottom quintile of incomes is the most upwardly mobile; much like the old saying about "when you're down and out the only way is up".  What's going on here?


One explanation of these findings is there is regression to the mean — if your parents are particularly unlucky, they may find themselves at the bottom of the economy. You, on the other hand, can expect to have average luck and will find it easier to do better than your parents. At the other end of the income distribution, one reason you might have very rich parents is that they have especially good luck. You are unlikely to repeat their good fortune, so you will struggle to do better than they did.

But that doesn’t change what actually happened in the last three decades of the 20th century in the Isaacs study: the children from the poorest families added more to their income than children from the richest families. That reality isn’t consistent with the standard pessimistic story that only the richest Americans have benefited from economic growth over the last 30–40 years. Or that only the richest Americans have gotten raises. The pessimistic story based on comparing snapshots of the economy at two different points in time misses the underlying dynamism of the American economy and does not accurately measure how workers at different places in the income distribution are doing over time.

Part of the false view we get of income inequality comes from simple arithmetic.  If you measure inequality by comparing the number of dollars it takes to land at a certain income percentile, with a hard floor on the low end ($0 per year in wages) but no ceiling on the top end, any growth in the economy combined with simple arithmetic demand that incomes at the top will pull away from incomes at the bottom, for the same reason that any point on the surface of a balloon will get farther and farther away from an imaginary fixed point at its center as the balloon is inflated.

I get that it's a political season, and if you honestly could ask one of these candidates what Income Inequality means you wouldn't get an honest answer.  Or a worthwhile or meaningful answer.  Final words to Russ Roberts:


There’s a lot more to study and understand. But what the studies above show is that the economic growth of the last 30–40 years has been shared much more widely than is generally found in the cross-section studies that compare snapshots at two different times, following quintiles rather than people. No one of these studies is decisive. They each make different assumptions about income (see the footnotes below), which people to include, how to handle inflation. Together they suggest the glass isn’t as empty as we’ve been led to believe. It’s at least half-full.

This does not mean that everything is fine in the American economy. There are special privileges reserved for the rich that help them reduce their risk of downward mobility — financial bailouts are the most egregious example. There are too many barriers like occupational licensing and the minimum wage that handicap the disadvantaged desperately trying to succeed in the workplace. And the American public school system is an utter failure for too many children who need to acquire the skills needed for the 21stcentury. But the glass is at least half-full. If we want to give all Americans a chance to thrive, we should understand that the standard story is more complicated than we’ve been hearing. Economic growth doesn’t just help the richest Americans.