I concluded part 1 of this little series by saying I purchased two Panasonic NCR18650BD batteries (BD is the important piece of the number that calls out these particular cells); these are sold as 3200 mAH, and capable of 10 Amp surges.  I don't anticipate surge current being an important part of my application, but it's a "nice to have" feature.   I found the data sheet for the batteries, which is useful and going to be part of my basis here (pdf warning).

Are my batteries really what they're sold as?  If I put them on my computerized battery analyzer, I should be able to measure that 3200 mAH if the seller is honest, right?  Well, maybe.  Welcome to the world of specsmanship - writing specifications to sell a product and sound like the best while not lying.   Jumping to the conclusion of the story, let me show you a plot of the battery discharge when running at 1A, or roughly 1/3 of capacity (usually written as C/3). 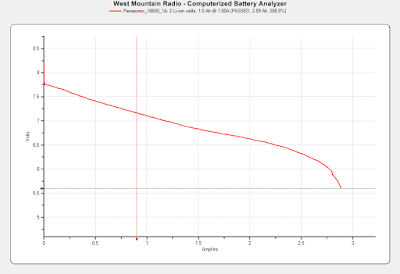 The first thing to note is that the data sheet never shows a number as high as 3200; in fact, the datasheet says they claim to be rated for 2980 mAH at 20C, although they're almost universally sold as 3200 mAH.  The highest "Typical Capacity" it shows is 3180, and I'm willing to say that's "close enough" to 3200 to be where that number comes from.  Here's the important table from that sheet.  I don't see an explanation for the values in blue - I'm guessing they're the minimums over the temperature range. 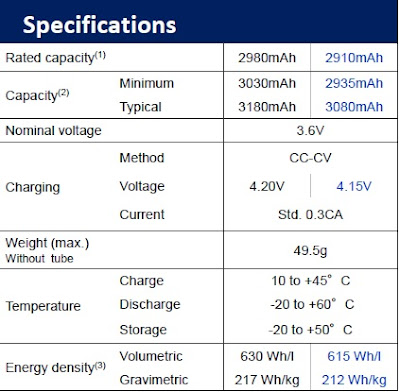 My plot (above) cuts off the discharge at a voltage of  2.8V/cell, that's the red horizontal line (you can read it says 5.6V - there are two cells in series in this test).  The datasheet's discharge tests turn off the battery at 2.5V/cell.  If my system cut off at 2.5/cell instead of 2.8, that would push the capacity up. Does that close the difference between 2900 mAH and 3030?  It might well.  (Ignore the vertical line, I clicked the wrong button starting the test.)

Another factor to know is that the charge lasts longer and looks like higher capacity when the discharge rate is lower.  There is a chart showing the apparent capacity difference for charge rates of 0.2C (606mA), 0.5C (1015mA), 1.0C (3030mA) and 2.0C (6060mA), and the capacity appears around 10% higher at the lowest discharge rate of 0.2C.   What discharge rate is used for their specification?  I don't see it listed.  When I was involved in specifying batteries at Major Defense Contractor, around 1992, the usual practice was that rechargeable batteries were rated a C/10, or 0.1C.

Based on everything I can see, I can't convince myself these batteries aren't exactly as specified.  They appear to be in the range of 3000 to 3200 mAH capacity and behave like I think they should. 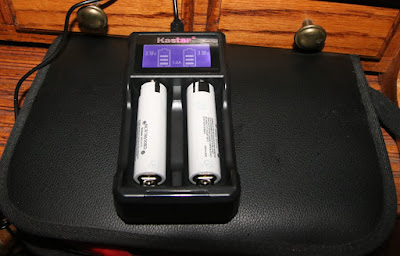 The two Panasonic batteries on the charger.

Now for an example of bad.  This weekend was the annual ham radio swapfest in town, and a seller was there with some 18650s.  He was selling batteries marked something like 72 or 7600 mAH and 4200 mAH.  As I implied yesterday, I don't think anyone can really get 7600 mAH out of a battery this size, so I bought a pair of the 4200 mAH cells just to experiment on -- and I don't think anyone can get that capacity, either..

I know that one of the ways to cheat on making a battery is to just put less "goop" in it: both electrodes and electrolyte.  As regular reader Reg T said, one can weigh the batteries.  I weighed the two good batteries on a Horrible Freight scale.  They weighed about 94 grams.  Then I put the two hamfest batteries on the scale: 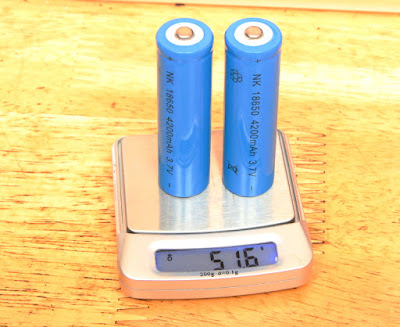 Gee, they're supposed to get 1000mAH more out of the battery with 45% less stuff in them?  Nah.  Ain't gonna happen.  Physics is a bitch about the "you don't get something for nothing" stuff.  Don't even think about trying it.  So I tried charging and discharging.  Since I had run my first test on the good batteries at C/2, 1.6A, I set these to run at C/2 or 2.2A.  They lasted 10 seconds.  To cut the story (which really could have been cut at the weight), I kept reducing the discharge rate, alternating charge/discharge cycles and never got anything close to even half of their stamped rating; they weigh 55% of the good batteries, so perhaps they should be closer to a 1600 mAH performance.

The best I got out of these batteries was about 250 mAH.  I can't know if these were good and went bad because of bad storage, if the seller bought them expecting they were good and was cheated or just what.  All I know is that I can demonstrate these batteries aren't what they're sold as.  To be honest, I expected them to be junk, just maybe not this bad.