Stan Lee, probably America's most prolific story teller of the 20th and early 21st century left us today at age 95.  The last I heard, within the last couple of months, he was working on the coming Marvel Cinematic Universe movies currently in the production process.  That tells me it was probably not a long lingering illness.  That's A Good Thing.

To those kind of peripherally familiar with Stan, he was the creator of Spider Man, but he was more than that.  He gave life to a host of story lines in the Marvel comics, many of which have been turned into move franchises.


As the guiding force behind the spectacular rise of Marvel Comics in the 1960s, Lee — and his artistic collaborators — devised characters that broke the mold of conventional comic-book superheroes: No longer were they one-dimensional costumed crusaders who were all good, struggling against villains who were all bad.

Marvel's superheroes, which Lee developed with Marvel artists such as Jack Kirby and Steve Ditko, battled not only complex villains but also their own personal demons in stories that have been praised for their “wit and subtleties” — ingredients that greatly expanded the appeal and readership of comic books.
....
But the character that Marvel had the most success with was Spider-Man, which Lee and Ditko introduced in August 1962.

Spider-Man's alter ego, Peter Parker, was a bookish and alienated teenager who gained his superpowers after being bitten by a radioactive spider.

Although the web-slinging crime fighter clashed with various villains, he was still the same geeky Parker: a bookworm who is bullied by football players, ignored by girls and lives with his motherly aunt, who reminds him to wear his galoshes in the rain.

“You ask the audience to suspend disbelief and accept that some idiot can climb on walls,” Lee said in a 1992 Washington Post interview, “but once that’s accepted, you ask: What would life be like in the real world if there were such a character? Would he still have to worry about dandruff, about acne, about getting girlfriends, about keeping a job?”

Among fans of the Marvel Cinematic Universe a part of every new movie is watching for Stan Lee's cameo appearance.  This thread on Reddit has the canonical capture of them all; reproduced here at lower resolution.  Unfortunately, it stops about a year ago, before the last few movies. 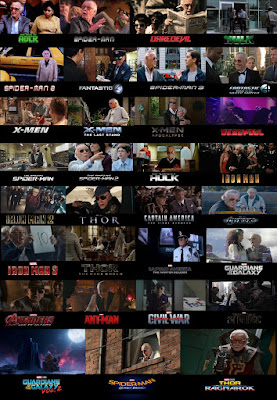 This shows almost the complete Marvel phase 1 through phase 3 movies except for the last few: Black Panther, Infinity War, Deadpool 2, and Ant Man and the Wasp - in that order. Coming in 2019 will be Captain Marvel, with the introduction of Brie Larson as the eponymous lead (I just don't get enough chances to use the word 'eponymous'), and then Avengers 4, which settles the majority of damage done in Infinity War.  To some degree.  Probably.


Avengers 4 is the end of Marvel Cinematic Universe Phase 3. Sony will technically kick off Marvel’s Phase 4 with Spider-Man: Homecoming sequel on July 5, 2019. Sony owns the rights to Spider-Man, but his story takes place in the MCU, proved by Captain America: Civil War.

That’s it for Marvel's confirmed Phase 4 release dates, though we do know Marvel has greenlighted a Black Panther sequel, a Doctor Strange sequel, and another Guardians of the Galaxy movie to complete the trilogy. Expect to see those characters back after Avengers 4.

There I go getting all ramped up over the coming movies.  This is supposed to be a sober, quiet, "so long, Stan Lee.  You've brought me hours upon hours of fun, escapism, and lighthearted entertainment.  I'm going to miss you."