Not in the Drakes Cakes sense, but to the US Marine Corps.  November 10th is the day traditionally celebrated as the founding of the Marines in 1775 at Tun Tavern, making this the 243rd anniversary.  Which means there were "US Marines" before there was a US.  What did they call themselves in 1775? 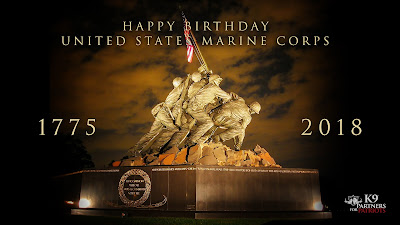 As I've said before, everyone knows there's a constant din of the different services poking fun at each other, but I don't have a dog in these fights.  Never was in any branch.  The systems I've worked on tended to be for the Navy with some split between the Air Force and the Navy.  All I can say is that I've worked on some of their toys.

I know that all sorts of kids from all sorts of backgrounds go into the Marines, but I've never met an ex-Marine who wasn't an honorable man.  Considering that perhaps the most famous marine, Chesty Puller, is quoted as having said, “Take me to the Brig. I want to see the 'real Marines' ”, maybe I've only been meeting fakes.