Let me introduce you to a name that everyone should know but few do: Michael Minovitch.  Michael Minovitch is almost single-handedly responsible for developing the math behind gravity assist trajectories, often called a gravitational slingshot that NASA/CalTech's Jet Propulsion Laboratory uses for deep space missions.

Dr. Minovitch was a grad school student in the summer of 1961, and given a tough but solvable problem that was important in those earliest days of spaceflight.


The problem was to determine the parameters of a conic trajectory (semi-major axis and eccentricity) of a free-fall vehicle passing between two given points with a given flight time moving under the gravitational field of the sun.  Minovitch solved the problem and presented his solution in the form of his first JPL paper dated July 21, 1961.

During this study, he became interested in a much bigger problem, one that no one knew of a solution for:


... his work on the problem offered insight into a far more difficult challenge which had yet to be solved: determining the exact three-dimensional approach trajectory of a free-fall space vehicle approaching a target planet such that the planet's gravitational field, along with the Sun's gravitational field, could deflect the vehicle’s unpowered trajectory onto a new path. This was one of most difficult and famous problems of celestial mechanics: the “restricted three-body problem” for motion through the solar system.

Minovitch believed he could solve the problem by using a different perspective to define a conic orbit in three-dimensional space. By converting from a planet-centered reference frame to a Sun-centered reference frame (as he had done for his JPL-assigned research project), he realized he could develop and confirm a new theory for achieving unlimited interplanetary space travel through the solar system, but powered solely by gravity-based propulsion. He presented his results in late August 1961.

His big insight was to look at the three bodies (sun, destination planet, spacecraft) and realize he could "steal" some energy from the planet and speed up the spacecraft from the frame of reference of the sun.  Which led to the realization that some momentum could be stolen to speed up the spacecraft to go to a farther away planet and reduce mission times.  Until this time, very few people had ever considered a way of propelling spacecraft that didn't involve any of the action/reaction systems:  conventional rockets, nuclear powered or ion-powered spacecraft.  Flights to the outer solar system were considered out of reach because of the long travel times at conventional rocket speeds.  Nuclear powered spacecraft had been talked about but nobody had constructed one that's flyable (nor has anyone done it since then).  Conventional rockets can only achieve limited speeds, due to the self-limiting situation of fuel being required to lift fuel for the mission.  This gave the possibility of achieving higher speeds without lifting more fuel by using the planets themselves.  (A good look at some of the math, and a wiki page showing animated visualizations)

It wasn't long before others at the JPL looked into the work, calculated if they could achieve the navigational accuracy to not smack into a planet and pickup the calculated speed.


In 1964 when Gary Flandro came to JPL, he was assigned to investigating possibilities for outer planet missions. When he began to consider gravity slingshots, he rediscovered Minovitch's alignment. Flandro calculated a number of routes through the outer planets that could use the alignment. His paper, citing Minovitch's work, was published in 1966. Flandro is generally given the credit for the “grand tour” of the outer planets.
...
Francis M. Sturms Jr and Elliott Cutting at JPL compared the navigational accuracy needed for a gravity slingshot with what could actually be achieved. They found a good match, and applied the method to the Mercury mission Mariner 10. It was successful. The probe picked up gravitational energy from Venus, which reduced the launch energy.

Since then, gravitational slingshot/assists have been used on virtually every interplanetary mission - the only exceptions I can think of are missions to Mars launched around opposition, which are short flights for an unmanned probe.   Some probes have made multiple loops around inner planets (Venus and Earth) before heading for the outer planets.

When Minovitch was working on his big paper on gravitational assist, he became aware of the possibility of the Grand Tour of the outer planets mentioned in that paragraph above, due to an arrangement that comes around once every 175 years.  After Mariner 10's success, JPL scientists began planning a Grand Tour mission, which eventually became a bit less grand due to budgets, but gave us Voyagers 1 and 2, both of which are still reporting back and both of which have left the solar system.

I opened this piece up with a link to Michael Minovitch's "Gravity Assist" page on the web.  There's a wealth of information there, and a bit of what seems like "hey, I did it first!" disputes about other researchers.  Reading several pages on this, it seems difficult to say Minovitch invented everything about gravitational assist flight, but there's no doubt he was a major contributor to it. 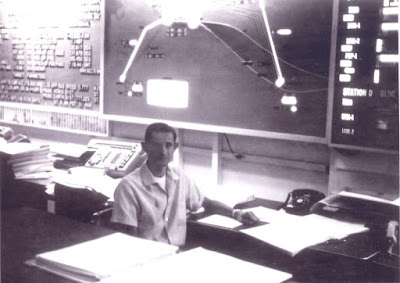 Michael Minovitch at JPL computers for the Mariner II mission, August, 1962.  From his website.

Another guy that all space geeks should know about, but don't.