The Guardian (UK) titles the article "First Ever Plane With No Moving Parts Takes Flight", but that's not true at all.  It's not what they mean.


The first ever “solid state” plane, with no moving parts in its propulsion system, has successfully flown for a distance of 60 metres, proving that heavier-than-air flight is possible without jets or propellers.

The glorified paper plane shown flying in the article is flying with ionic wind propulsion.  The approach uses a powerful electric field to generate charged nitrogen ions, which are then expelled from the back of the aircraft, generating thrust.

Ionic propulsion is not a new idea; it has been investigated off and on since the 1920s, and always found to be impractical.  No aircraft has ever been known to fly with purely ionic propulsion.  NASA investigated it in 2009 (pdf warning).  Technologies change, though, and no branch of technology changes faster than electronics.  Could it be the shrinking of power supply components can make the approach feasible?  The investigator this time is MIT aeronautics instructor Steven Barrett, who “...went through a period of about five years, working with a series of graduate students to improve fundamental understanding of how you could produce ionic winds efficiently, and how that could be optimised.” 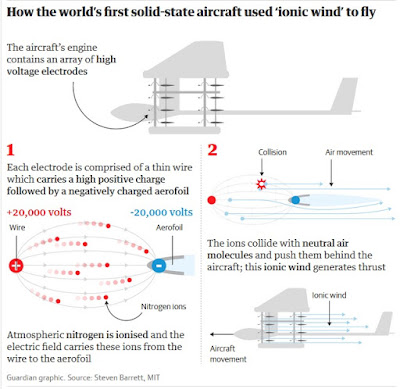 The end result is a propulsion system that is entirely electrically powered, almost silent, and with a thrust-to-power ratio comparable to that achieved by conventional systems such as jet engines.

The abstract of their paper in Nature points out:


Here we demonstrate that a solid-state propulsion system can sustain powered flight, by designing and flying an electroaerodynamically propelled heavier-than-air aeroplane. We flew a fixed-wing aeroplane with a five-metre wingspan ten times and showed that it achieved steady-level flight.  All batteries and power systems, including a specifically developed ultralight high-voltage (40-kilovolt) power converter, were carried on-board. We show that conventionally accepted limitations in thrust-to-power ratio and thrust density 4,6,7, which were previously thought to make electroaerodynamics unfeasible as a method of aeroplane propulsion, are surmountable. 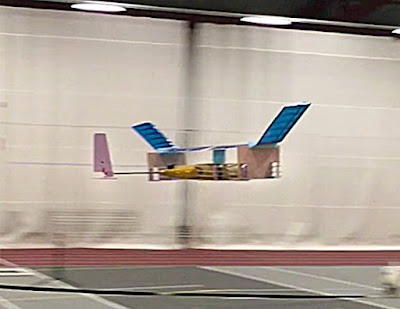 One of the indoor test flights of their "five meter wingspan" aircraft - which resembles a box kite.  If you squint.  It was launched by what seems to be similar to an aircraft carrier catapult, raising questions about just what sort of thrust to power ratio they can achieve.  Model airplanes with two-stroke internal combustion engines are capable of taking off without a catapult.  On the other hand, by all accounts this prototype is very early in the development process and a primitive design.

Does this represent some sort of new paradigm in aviation that will lead to passenger airplanes powered by ionic acceleration like this?  Maybe it doesn't achieve that level, but instead becomes part of a niche market; maybe for drones, maybe replace the cellphone-relaying, high-altitude balloons that go high and stay over one point on the ground?   Something like those options might well happen.