As A "Real Money" Guy, This Drives Me Nuts

According to some news reports yesterday, Trump was saying he wanted the Federal Reserve to bring back quantitative easing.


“I would say in terms of quantitative tightening, it should actually now be quantitative easing,” the president said. “You would see a rocket ship,” Trump asserted, shortly after the government released employment data for March. The report showed 196,000 jobs added in March and the unemployment rate staying near a 50-year low of 3.8%.

Quantitative tightening is the the Federal Reserve trying to clean up their balance sheet from all the havoc they created during the Obamanation.  CNBC offers this balance sheet.  I think it's too low, perhaps half the actual, but it's all we have. 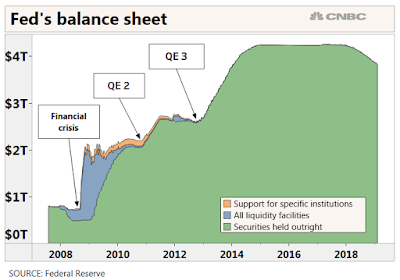 At the far right, where the green blob starts to come down, that's the effects of their efforts at quantitative tightening in the last year, which may well be over with.  If not, they need to wind some of those securities they're holding to have any response available for the next crash.

I think that Trump feels the sting of Obama and his acolytes claiming Trump took over Obama's recovery and thinks the Fed made Obama look good so they should do the same for him.  "They did QE 1, 2 &3 for him, why not do QE for me?"

I would hope that saner heads would tell him that QE was an "extraordinary measure" to meet the 2008 crash and the economy is still feeling the bad effects of the Fed's actions.  I've read he's nominated both Herman Cain and Stephen Moore to be Fed governors.  Cain was the Chairman of one of the Federal Reserve Banks, the Kansas City bank's Omaha, Nebraska branch back in '89-'91, so not exactly a real insider, but not exactly an outsider either. Steven Moore is a "visiting fellow" at the Heritage Foundation, and has a long history in economics.  He's a founder of the Club for Growth and the Free Enterprise Fund.   Both of those claim to be advocates of "economic growth, lower taxes, and limited government".  I don't actually know if he's a "real money" guy but I'm rather sure Cain isn't.  Still, either one of those guys, but especially Moore, should be a "saner head" to school the president.

While the president has done a lot that I approve of, like his deregulation, making progress at cleaning up the VA, and his handling of some problems like Isis, but during the campaign they got my hopes up with the talk of his advisor Dr. Judy Shelton advocating effectively going to a gold standard by providing something like the Treasury Inflation Protected Security (TIPS) bonds that would be redeemable in either dollars or gold.  For a brief moment there was hope the Federal Reserve might be severely restricted or even shut down.  Not that I didn't see the handwriting on the wall within days of the election when he picked "Government Sachs" veteran Mnuchin as treasury secretary.