Germany's Lost WWII Uranium And How Close They Got

Timothy Koeth is a physicist at the University of Maryland.  Several years ago, a friend gifted him an oddly heavy cube of metal, about 2" on a side.  He says he instantly recognized it as a cube of uranium and believed it to be one of the missing cubes from Germany's WWII attempt to build a nuclear reactor.  It might have helped that there was a note in the package saying, "Taken from Germany, from the nuclear reactor Hitler tried to build. Gift of Ninninger", and that the friend giving the gift was there to explain things.


Thus began Koeth's six-year quest to track down the cube's origins, as well as several other similar cubes that had somehow found their way across the Atlantic. Koeth and his partner in the quest, graduate student Miriam "Mimi" Hiebert, reported on their progress to date in the May issue of Physics Today. It's quite the tale, replete with top-secret scientific intrigue, a secret Allied mission, and even black market dealers keen to hold the US hostage over uranium cubes in their possession. Small wonder Hollywood has expressed interest in adapting the story for the screen.

Until quite recently, Koeth ran the nuclear reactor program at UMD, which is how he met his co-author. Hiebert is completing a PhD in materials science and engineering, specializing in the study of historical materials in museum collections (glass in particular) and the methods used to preserve them, using the reactor facility for neutron imaging of a few samples. Koeth told her about his research into his cube's origins, and she started collaborating with him as a side project.

There were 664 uranium cubes in the reactor project and the team has tracked down 10 in the US.


[T]he Smithsonian Institute had a German uranium cube in storage. "We wound up in a warehouse that looked like the final scene in Raiders of the Lost Ark, wooden crates from floor to ceiling," said Koeth. "And in one of those crates there was another German cube."

They tracked a third to Harvard University, where it's regularly passed around in classes for students to "experience" (my words).  Uranium is dense, the 2" cube weighs about five pounds, and for all the concern most people have, the cubes aren't dangerous to hold.  According to Koeth, the uranium is so dense, "it winds up shielding itself.  The radiation you measure from it is only coming from the surface."

The Germans were said to have a two year headstart on us at the time the Manhattan Project began in the US.  The German project, though, was broken into three facilities, Berlin (B), Gottow (G), and Leipzig (L), and was plagued by "fierce competition over finite resources, bitter interpersonal rivalries, and ineffectual scientific management", according to Koeth.


Renowned physicist Werner Heisenberg headed up the Berlin group, and as the Allied forces advanced in the winter of 1944, Heisenberg moved his team to a cave under a castle in a small town called Haigerloch—now the site of the Atomkeller Museum. That's where the group built the B-VIII reactor. It resembled an "ominous chandelier," per Koeth, because it was composed of 664 uranium cubes strung together with aircraft cable and then submerged in a tank of heavy water shielded by graphite to prevent radiation exposure. 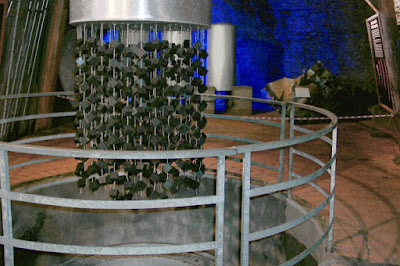 Mockup of the B-VIII (eighth Berlin experiment) reactor at the Atomkeller Museum.

By the winter of '44, the Allied Forces were advancing on Berlin and Haigerloch, forcing Heisenberg into action to try to save the experiment.  Heisenberg took apart the B-VIII experiment and buried the uranium cubes in a field, ferreting away key documentation in a latrine. (Pity Samuel Goudsmit, the poor physicist who had to dig those out.) Heisenberg himself escaped by bicycle, carrying a few cubes in a backpack.

Koeth initially assumed all the uranium cubes would have been confiscated after the Nazi defeat and sent to the uranium processing facility at Oak Ridge in the US, but a historian told him that by April 1945, the US had plenty of feedstock material and wouldn't have needed the extra uranium. So he wondered if someone might have handed them out as souvenirs, perhaps to serve as paperweights.

One of the interesting things to come out Koeth and Hiebert's research was to find out that the Germans got close to creating a sustaining reactor but were kept from achieving it by their management system.


One of the most surprising things Koeth and Hiebert have discovered so far is that while the 664 uranium cubes at Haigerloch weren't enough to build a self-sustaining reactor, an additional 400 cubes were located within Germany at the time.

"If the Germans had pooled their resources, rather than keeping them divided among separate, rival experiments, they may have been able to build a working nuclear reactor," said Hiebert. "This highlights perhaps the biggest difference between the German and American nuclear research programs. The German program was divided and competitive; whereas, under the leadership of General Leslie Groves, the American Manhattan Project was centralized and collaborative."

The extra 400 cubes would have given them enough uranium, but it's still doubtful that they would have made the reactor work because they were short of another key requirement: heavy water.


"Even if the 400 additional cubes had been brought to Haigerloch to use within that reactor experiment, the German scientists would have still needed more heavy water to make the reactor work. Despite being the birthplace of nuclear physics and having nearly a two-year head start on American efforts, there was no imminent threat of a nuclear Germany by the end of the war."

While it seems there's no good answer to where the other 650-odd uranium cubes are, Koeth and Hiebert say that they believe the rest of the cubes are in various schools and collections as historical oddities.  They're actively trying to track them down and account for all of the missing uranium.


Koeth and Hiebert said that anyone with any information about one of these uranium cubes, can contact them via email at uraniumcubes@gmail.com.

Which is probably the coolest Gmail address that I've ever seen. 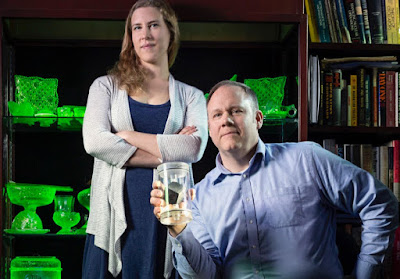 Hiebert and Koeth with the cube he was gifted.  The green glassware behind them is probably uranium glass, given Mimi Hiebert's research interest cited above.  Uranium glass, sometimes called Vaseline glass, is easily found in places like eBay and can be sent through the mail.