22 years ago, the Men in Black comic books came to the big screen, led by Will Smith and Tommy Lee Jones.  As always, with a successful first film, a sequel came with MIB II in '02 and MIB 3 came 10 years later in '12.  Although neither one of us ever read the comics, goofy sci fi is right up our alley and we saw them all.

I started hearing about an extension of the franchise several months ago, and more details since then.  Men in Black: International opened last weekend to a worldwide gross of $104 Million versus an estimated production cost of $110 M.  I think it's safe to think there will probably be another sequel.

From the view of the cast, this is virtually a complete reboot.  Only Emma Thompson, who headed the New York office as Agent O in MIB 3, comes from the previous movies.  The new agents are straight outta the Marvel Universe, Chris Hemsworth (Thor) as Agent H and one of the fan favorites from Thor Ragnarok, Tessa Thompson (Valkyrie) as Agent M.  As I've mentioned many times, I thought Thor Ragnarok was the peak of the Marvel movies.

MIB: International comes close.  First off, I've become a fan of Chris Hemsworth.  For a guy who could easily play the "too good looking to be true" action hero, he has a self-deprecating quality that comes across well on screen.  (It's rumored the "beer belly Thor" from Endgame was his idea - and that idea really struck me funny).  To be honest, I didn't think much of Tessa Thompson in Ragnarok.  She was important to the plot, but I just didn't notice her much.  In this movie, I thought she had a good on-screen personality and brought the character to life.  In the IMDB universe, they talk about pairing the two of them for their "on-screen chemistry" in Ragnarok and moving that to the MIB universe.  Ms. Thompson brings up the point that all of the other MIB movies are "buddy films" that are all about the relationship between the two main characters, agents J and K and this one becomes a buddy film, as well.

The movie opens with Agent M (Molly) as a young girl.  Her family has an encounter with some aliens and are visited by the MiB.  A mainstay of the movie franchise is the agents flash a "Neuralyzer" in the eyes of witnesses, which wipes the memories of what they've just seen so that the general public doesn't get terrified that aliens live among us all the time.  When the agents Neuralyze her parents, Molly is hiding behind curtains talking to the furry little alien in her room.  She grows up constantly searching for everything she can learn about the mysterious MiB, eventually tracking them down and walking into MiB headquarters to try and join.

The plot of the movie concerns a problem in the organization.  There's a leak from MiB in London where they send Probationary Agent M on assignment.  As always, the fate of the world is at stake as different alien races bring their hostilities to Earth.  As always, tons of sight gags, many different alien costumes, alien weapons, amazing MiB technology, and lots of witty one-liners.

Definitely worth the time to go see.  Left me wishing there was a bit more movie; at 114 minutes, not quite two hours duration, it's much shorter than Avengers Endgame. 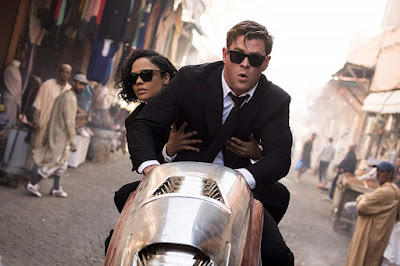 Chris Hemsworth and Tessa Thompson riding a rocket-powered, levitating "motorcycle" through the streets of Marrakesh.