Economics is regularly derided as "the dismal science" but in my experience contains the only social science law that approaches the character of physical law: supply and demand.  More relevant to my peripatetic writings tonight is that economics frequently studies incentives and how they work.

The Silicon Swamp area isn't a big city or anything the size of Silicon Valley, but it's not a small town either.  The entire county, 70 miles long and mostly along the coast, has a population of about 600,000.  As of this afternoon, there have been exactly 2 confirmed COVID-19 cases in the county.

Last week on our weekly grocery store run (a Publix), the only things that were in short supply were toilet paper and Clorox wipes (Mrs. Graybeard prefers those for cleaning the stove so they're something we buy regularly).  Today was different.  The entire toilet paper, facial tissues and paper towels aisle was stripped clean, and all around the store other sections were either bare-shelved or stripped close to bare.  Rice and pastas had a couple of packages left.  There was not a single package of chicken, or turkey to be had.  Do I need to say I've never seen anything like this? 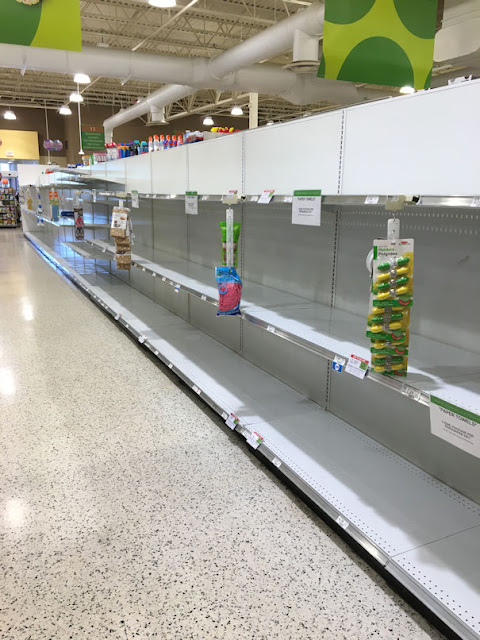 Many sections had a "Limit 2 per customer per day" sign, including eggs, prepared meats and cheeses, prepared sauces of all ethnicities (like Italian, Mexican, etc) and more.  It got me thinking this is an interesting economics experiment, in that sense of economics as the study of incentives.

In particular, when faced with a sign like that and a need for one, do you buy one like every week or do you buy two on the possibility it's worse next week and there are none to buy?  We had that with eggs.  There were very few eggs out; not stripped clean but close.  We ordinarily get a local brand of "pasture raised, all natural" eggs (because the package has picture of a manatee on it, we refer to these as manatee eggs).  Ordinarily, we go through about a dozen eggs a week.  We bought two dozen this week on the possibility these are the last eggs we'll get for a while.

As I said, that was all around the store.  My guess is that the limit causes more people to increase what they would buy rather than limit it.  People coming for a few giant packages of paper towels or TP will stop at two because they have to.  There's no saying they won't come back the next day, though, while it's pretty sure that we won't.

To be honest, the response to the Coronavirus scares me more than the virus does.  The only scary thing about the virus is that it reproduces.  Eventually, everyone gets it and gets over it (or not, whether the fatality rate is 1% or 3% or 0.2% is still hard to know); the essence is that it's still self-limiting in the long run.  Gradually, the population develops immunity to the virus and the toll lessens.  The reaction of sending everyone in the country a "four digit" check is terrifying.  It seems like Modern Monetary Theory springing to life and I've always been critical of these ideas.  They believe they can make up whatever amount of money they want out of thin air, and I say that devalues every dollar we have.  I've said a thousand times that printing money out of thin air is painting a target on the backs of the middle class and especially anyone living (or planning to live) on savings.

Stupidity in the response to the virus?  As Einstein said, “two things are infinite: the universe and human stupidity; and I'm not sure about the universe.”