I think it's day 728, but it's around that for sure.  In March of 2018, the Florida legislature passed a law making the twice-yearly shifting of the clocks by an hour a thing of the past.  Unlike other states that have plotted an exit strategy from Daylight Saving Time, Florida was going to stay on DST all year round.  Why not stay on standard time?  Apparently the tourist industry thought that shifting the time to put sunrises and sunsets at a later hour would sell better to people coming down here in mid-Winter.  That aspect was opposed by PTA groups who are concerned about it putting kids en route to school during dark winter mornings.  I wrote at the time:


All reports say that after his signing, we would require permission from the Fed.gov to enact it.  Assuming the Fed level at this time is inclined toward letting states do what they want in such minor things, the bill is supposed to take effect this summer, meaning this morning's clock resetting will be the last of those.

As far as I can tell, that's where it still stands.  I did a little search engine research and found the Jacksonville Times Union updated this story just this past Thursday.  Apparently it turns out that the fact the new Florida law that doesn't put us on standard time all year long is the issue and that if we had gone for standard time instead of staying on DST, we wouldn't have to wait on the Feds.  Nobody seems to ask the question here: why does the Federal Government have authority over whatever any state decides it wants to make its time.  Why does the Fed.gov Nanny have to approve this?


While state lawmakers in Tallahassee approved a bill in 2018 that would allow Florida to remain on daylight saving time year-round, it only works if Congress amends U.S. code to allow it.

Sen. Marco Rubio reintroduced the so-called Sunshine Protection Act in 2019 in an effort to end the twice annual time changes and has picked up notable cosponsors, including Tennessee Republican Lamar Alexander and Sen. Patty Murray, D-Washington. Sen. Rick Scott, R-Florida, is also a co-sponsor. A matching bill in the U.S. House is sponsored by Rep. Vern Buchanan, R-Sarasota.
...
According to Buchanan, seven states have passed bills to move to daylight saving time permanently.

For now, however, the only power individual states have is to opt out of daylight saving time, putting them on standard time permanently, such as what is practiced by Arizona, Hawaii, Puerto Rico and the U.S. Virgin Islands.

It goes on to say that entrepreneur Scott Yates, who runs a website called #LockTheClock, says that seven states have passed similar laws and they're all hung up in the Senate.  He's trying to coordinate a petition drive to bring Rubio's Sunshine Protection Act before the Commerce Committee.  The petition is on Change.org  Fair warning - they will ask you if you'd like to donate to help cover their expenses.  I'll feel better about not dropping a contribution in their basket if you'll click on that link to the petition.  Yes, I am watching.  (Just kidding - that's not possible). 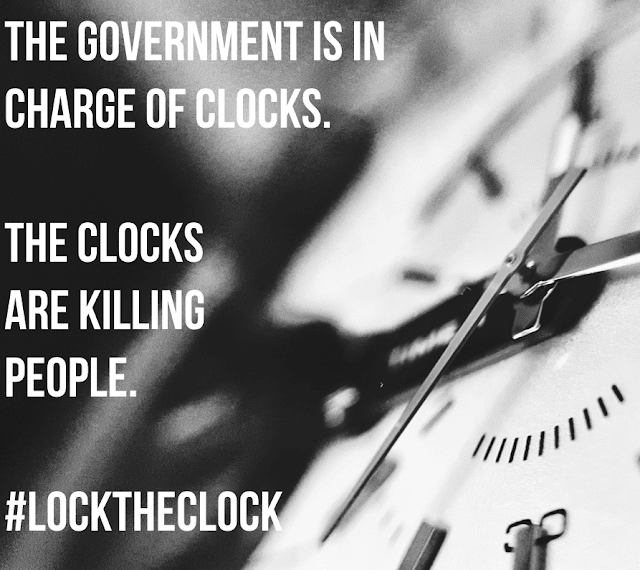 It may be a bit melodramatic to say the clocks are killing the people, but there are some well-documented side effects of the "jet lag" people get from the time changes: more car accidents, more accidents at work, higher rates of heart attacks and strokes, and more.

As I said two years ago, if I wrote such legislation, I would have made Standard Time the standard time.  Solar noon is when the sun is on the meridian, that line that goes from north to south passing directly overhead.  With DST, solar noon occurs at 1PM, not 12.  Maybe I'm anal-retentive, but having solar noon at 1PM forever is just wrong.