How Can We Have an Apocalypse Without a Good Comet?

Comets, like many astronomical phenomena, have long been associated with apocalyptic forecasts.  Even as recently as the 1910 apparition of Halley's Comet, two hundred years after Halley had calculated that the same comet had been returning roughly every 76 years without causing an apocalypse, predictions of disaster were rampant.


As the comet neared the Earth that year, the New York Times wrote that a French astronomer named Camille Flammarion had warned that poisonous cyanogen gas in its tail might “impregnate the atmosphere and snuff out all life on the planet.” Other scientists dismissed the claim as nonsense, but the prediction still sparked a minor panic. Before the comet passed by without incident that spring, many people sealed up their homes to keep out the fumes, stocked up on gas masks, and went to churches to pray for salvation. The more gullible among them even bought “anti-comet pills” from street vendors.

So how ya gonna have a proper apocalypse without a comet?

Take heart!  It turns out we may well have bright comet, visible to the naked eye, peaking around Memorial Day.  This aligns pretty well with Kung Flu virus and they could be peaking at the same time! Eleventy!


The possible celestial showpiece is known as Comet ATLAS, or C/2019 Y4. When it was discovered on Dec. 28, 2019, it was quite faint, but since then, it has been brightening so rapidly that astronomers have high hopes for the spectacle it could put on. But given the tricky nature of comets, skywatchers are also being cautious not to get their hopes up, knowing that the comet may fizzle out.

It has been quite a while - almost a quarter century - since we had a really great comet.  Comet Hale-Bopp's visit in the spring of 1997 might well have been the last great comet visible in the northern hemisphere, along with Comet Hyakutake the year before.  Hale-Bopp appeared during the year Mrs. Graybeard was battling cancer (a private apocalypse, a distant second behind your own private Idaho) and I'll always remember watching the comet keeping me company while out bike riding by myself - even visible above shopping centers with their lights on!  Hale Bopp had been being observed since its discovery in July of 1995, so it was much anticipated.  By comparison, Hyakutake was a surprise; discovered by Yuji Hyakutake with binoculars in January of '96.  It peaked in brightness within a few months, and was a lot of fun to watch.  At its peak, and from a dark location, the tail stretched virtually horizon to horizon.

Since then, opportunities for comet observation have poor.  ATLAS C/2019 Y4 was discovered at 273 million miles from the sun, at a very dim magnitude of 20, about 398,000 times dimmer than the threshold of naked-eye visibility.  Since then, though, ATLAS has been brightening at almost unprecedented rates.


As of March 17, ATLAS was already magnitude +8.5, over 600 times brighter than forecast. As a result, great expectations are buzzing for this icy lump of cosmic detritus, with hopes it could become a stupendously bright object by the end of May.

I've seen estimates that put the comet as the second brightest thing in the sky, behind the moon but brighter than Venus, during that week (May 24-31).  The best finder charts I've found have been at Comet Watch in the UK, and I'll post their overview chart here. 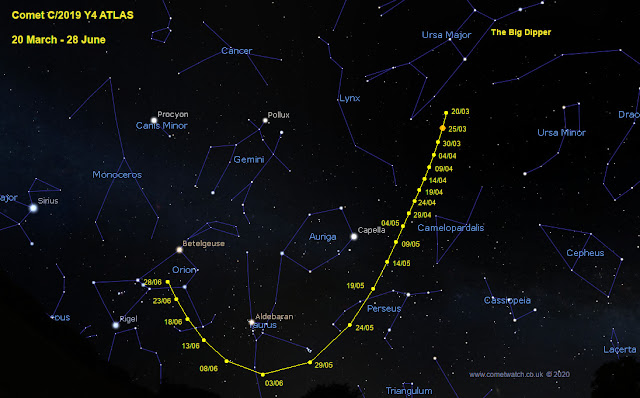 Nobody that publishes things on comets wants to commit to anything about the comet's brightness because they're just not very predictable.  Those of you of a certain age may remember hearing about Comet Kohoutek in about 1973, and how it was supposed to be the next Comet of the Century.  Except the predictions failed spectacularly and it barely made naked-eye visibility.

Unfortunately, there doesn't appear to be correlation with how apocalyptic events down here on Earth become and the comets' appearances either.  At least we can say we have both a pandemic and a comet!