We were treated to spectacular visuals on last night's SpaceX launch to bring cargo to the ISS.  This was a record launch for SpaceX in a couple of ways: their 50th successful booster recovery and the final flight of the first Cargo Dragon capsule.


At 11:50 pm EST (4:50 UTC), a flight-proven Falcon 9 booster and twice-flown Cargo Dragon spacecraft lifted off from SpaceX’s LC-40 Cape Canaveral Air Force Station (CCAFS) launch pad, sending the Dragon 1 spacecraft on its third and final orbital launch. Things went as planned and the booster nailed its second landing, coming to a rest at Landing Zone-1 (LZ-1), while Falcon 9’s second stage successfully placed Dragon in orbit and deployed the vehicle. Now safely in orbit with both solar arrays deployed, Cargo Dragon will use built-in maneuvering thrusters to tweak its orbit, ultimately rendezvousing with space station no earlier than the morning (EDT) of March 9th.

Hopefully wrapping up a decade of success, the CRS-20 mission will be SpaceX’s last under NASA’s Commercial Resupply Services (CRS) Phase 1 contract, marking Cargo Dragon’s 20th successful space station rendezvous and 19th operational resupply mission. Over those 19 CRS missions, SpaceX – once CRS-20 has safely berthed – will have delivered nearly 45 metric tons (100,000 lb) of cargo to the space station and returned another 31 metric tons (>70,000 lb) to Earth, remaining the only operational spacecraft capable of doing so. While Dragon 1 will cease operations after capsule C112’s planned reentry and splashdown sometime next month, the vast wealth of expertise SpaceX has derived has already been funneled directly into Crew Dragon (Dragon 2), its successor.

There are times I think to myself that my Space coverage seems weighted to SpaceX, but then I realize it's because they're doing so much more than the other companies I can read about.

Our view of the launch was different last night.  First off, it was crystal clear.  Secondly, the plan was to return the booster to Landing Zone 1 on Cape Canaveral instead of landing on their drone barge (OCISLY) hundreds of miles offshore.  Because of that, it was visually spectacular.  We got an excellent view of the long burn before landing - rather close and very bright.  The landing pad is about 35 miles north of us, so the actual landing is well below the horizon - all we'd see is the sky lighten up.  When they land on the drones far off shore not even that's visible.   When they land, they do two long burns of one of the booster's nine engines.  The engine burn we saw was still miles up and burns 20 seconds.  After coasting another 40 seconds, they do a longer final burn that slows it to almost zero speed to land.  A UPI photographer got this composite shot for a similar launch a couple of years ago.  It appears to be from the Titusville area north of here. 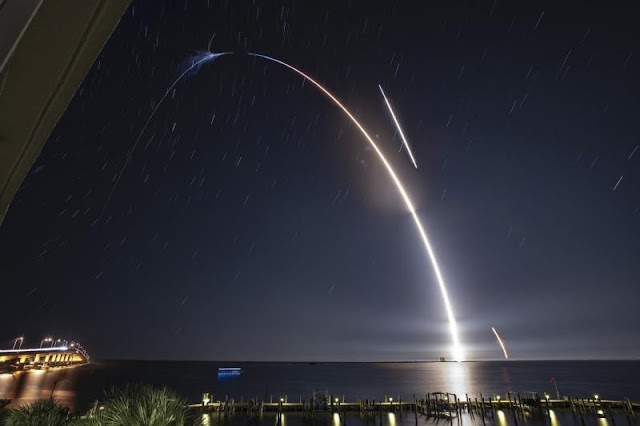 The total exposure here is around 8-1/2 minutes long.  The Falcon 9 is the main arc stretching right of center up and to the left.  Around the peak of that arc, about 2:20 (minutes and seconds) into the flight, the booster shuts off and then is let go of.  There's a dark gap there and an area of bluish white fuzz just past this, which is a short boost back burn of the first stage to get it started back to the landing zone.   The view of this is spectacular looking from the first stage itself in the SpaceX mission video.  The longer, straighter burn trail is what we watched from the backyard.  It starts about 6:40 into that video and runs about 20 seconds.  Another 40 seconds later the final burn starts - that's essentially invisible from here so we don't stay outside to try to see, opting to come into the house and watch the landing on the SpaceX live stream.

By the way, although I do live in the area that calls itself the Space Coast and watch just about every launch, by no means are we the only part of the state that gets to see launches.  Checkout McThag's experiments with photographing last night's launch.  I don't know where he lives, but I know he talks about locations on the west coast of Florida, and I know from driving there that it's in the vicinity of 120 miles from here.  As a rough guess, while I'm 35 miles from the launch pad, he's probably closer to that 120 miles.