SpaceX Shrugs off Weekend Failure, Hopes to Test New One “In a Few Days”

It's safe to say that by the nature of a proof test, SpaceX (in some sense) expected the SN01 fuel tanks to survive.  Nevertheless, here we are just over three days from the failure, SN02 is well into its manufacturing cycle and they're fairly certain they understand what went wrong.


Despite the apparent setback, it appears that SpaceX won’t have to wait long at all to continue its uniquely ‘hardware-rich’ Starship test campaign. With a workforce now several hundred strong and a great deal of hands-on and strategic experience gained from building Starships Mk1 and SN01, SpaceX is now practically churning out parts for future Starship SNxx prototypes. Most notably, Starship SN01’s predecessor is potentially just a few days away from being stacked into a finished tank section, hinting at the almost unfathomably speed that SpaceX is able to build full-scale vehicles even in early days of the program.


There’s a puck at the base that takes the engine thrust load. Don’t shuck the puck!

We’re stripping SN2 to bare minimum to test the thrust puck to dome weld under pressure, first with water, then at cryo. Hopefully, ready to test in a few days.

The speed they proceed at is breathtaking.  Given that Musk already revealed that Starship SN02 would feature improved tank welds, it’s safe to assume that the prototype will also have an improved thrust structure (i.e. “puck”).  Musk also tweeted acknowledgement to welding supplier Fronius and spoke of a need to get a better finish on their welds by planishing.  Eric Ralph, the author at the Teslarati piece,comments that the SN02 design, “already appears to be a departure from SN01’s apparently unsuccessful iteration,” but with the exception of cleaner seams, the two sections don't look that different to me. 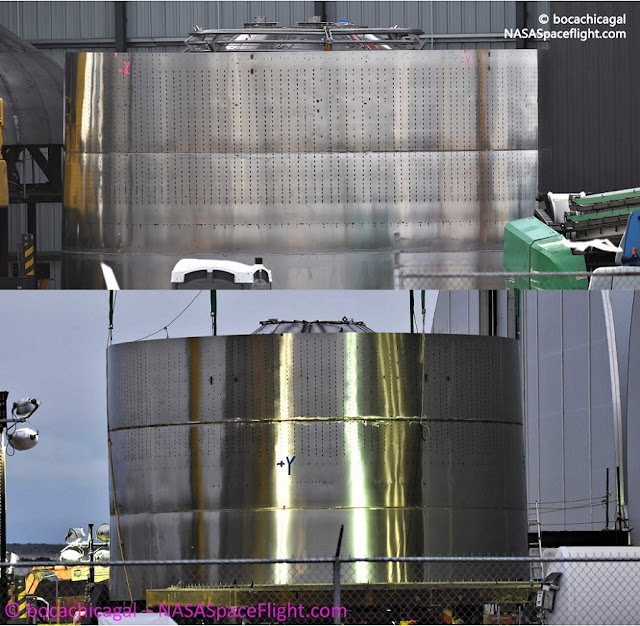 Starship SN02 (top) and SN01 Thrust Pucks.  Both photos copyright @bocachicagal (Mary) and NASASpaceflight.com.  Both are available as much bigger jpegs at Teslarati.


Even if it takes SpaceX 5-10 SN01-class failures to mature its South Texas rocket factory into a reliable machine and get to a point of stability and confidence with suborbital Starship flights, the total cost of that trial and error is comically insignificant relative to almost any other rocket development program in history. To be clear, SpaceX might benefit from going a little slower and refining Starship’s prototype design, but it’s impossible to know from an armchair. For now, the best available advice is to simply enjoy the show and view each potential test failure as just another small step along the path to Mars.

At the end of the piece on Friday night's test failure, I mentioned the almost impossibly fast recycling of a cargo resupply mission to the ISS after a decision to swap out the second stage of its Falcon9 booster.  That swap has occurred and the stacked rocket with payload was tested on the pad with no evidence of the problem that led to swapping out the second stage.  The test is referred to as a wet dress rehearsal (WDR) as well as a static fire of the booster.  That launch is now scheduled for Friday night at 11:50 PM EST.  SpaceX is noting this is the third mission for this cargo vessel, Cargo Dragon capsule C112, and


If all goes according to plan, it will be the spacecraft’s third cargo mission to the ISS since February 2017, becoming the third orbital SpaceX vehicle to do so. Even more significantly, C112 is poised to crush Cargo Dragon’s own previous record for the shortest time between two orbital launches.
...
Back in June 2017, SpaceX became the first private company in history to successfully reuse an orbital-class spacecraft on its CRS-11 Cargo Dragon mission, itself the first private spacecraft in history to successfully rendezvous with the space station. Since then, all but one CRS mission has featured an orbit-proven Dragon capsule, making CRS-20 the ninth time SpaceX will attempt to launch a spacecraft into orbit for the second (or third) time.

In other words, nearly half of all of SpaceX’s NASA CRS missions have featured flight-proven spacecraft, while several have also launched with flight-proven Falcon 9 boosters. Still, while extremely impressive that SpaceX has managed to convince the risk-averse space agency to fly several dozen tons of critical hardware on flight-proven rockets and spacecraft, Cargo Dragon capsule reuse has always been a comparatively lengthy and complex process.