If you haven't read Borepatch's piece today, Corona Virus and the Illusion of Science, I want to point out a couple of things.  First off, go read.  Borepatch excerpts and gets the important points from a piece by Vystavil Luboš Motl at The Reference Frame piece.  But I think the original source that Luboš links to at Medium, Don’t “Flatten the Curve”, stop it! by Joshua Bach is even more worth the time to read.  If you only have the time for one, read this last piece.

Do you have a tendency to think that perhaps suddenly shutting down all of civilization might be a little bit of an overreaction?  Everyone has seen this curve - as printed in Vox or the NY Times - or something similar too it.  The argument is that by social isolation the peak of the outbreak can be pushed out in time and lowered in impact (amplitude).  The critical horizontal line represents the capacity of our health care system, and the argument made visually is that by cancelling all conferences, sporting events, NBA, college March Madness tournament, and more, we can keep the Kung Flu from overloading our health care system at the simple cost of staying home more. 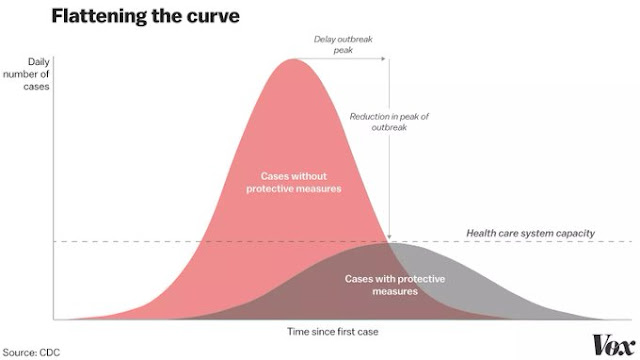 The problem is that this graph is conceptual, not hard numbers based on measured data.  To begin with, just a cursory look shows no numbers on the graph.  Are those curves supposed to represent the same total number of cases?  They sure don't look equal. Bach starts out his piece on Medium by saying:


These suggestions are dangerously wrong, and if implemented, will lead to incredible suffering and hardship. Let’s try to understand this by putting some numbers on the axes.

Then he goes through the exercise called “bounding the problem” in order to try to put realistic limits to numbers on the axes.  All in all, his arguments seem rather reasonable.


What is the capacity of the healthcare system?

This is a difficult question and cannot be answered in a short post like this. The US has about 924,100 hospital beds (2.8 per 1000 people). California has only 1.8. Countries like Germany have 8. South Korea has 12. (Their hospital system got overloaded nonetheless.) Most of these beds are in use, but we can create more, using improvisation (for instance using hotels and school gyms) and strategic resources of the military, national guard and other organizations.
...
More important is the number of ICU beds, which by some estimates can be stretched to about a 100,000, and of which about 30,000 may be available. About 5% of all COVID-19 cases need intensive care, and without it, all of them will die. We can also increase the number of ICU beds somewhat, but the equipment that we need to deal with sepsis, kidney, liver and heart failure, severe pneumonia etc. cannot be stretched arbitrarily between them.

I won't go into everything he has, but he assigns numbers to a whole host of variables to try to turn this conceptual graph into one with real numbers.  It looks very, very different.

The peak of the flattened curve, where we just barely touch the capacity of our healthcare system is about 2500 to 2600 days out.  That's around seven years.  Worse, the time to almost no cases stretches out nearly 4500 days; over 12 years.  Can you imagine living in the current state of the last self-isolating, toilet paper-hoarding week for 12 years?  Seven years?

Bach also says, and this is very important so don't miss this:


My back-of-the-envelope calculation is not a proper simulation, or a good model of what’s going on either. Don’t cite it as such!

While on the subject of the COVID-19 emergency, you should also look at Willis Eschenbach's piece on Watts Up With That, “The Math of Epidemics.”  Willis' main point is that when we talk about exponential growth of the pandemic, that can't happen - or it least it can't happen for very long.  The supply of new people to get infected can't support that growth for much time.  The real growth curve is the one I showed 10 years ago and re-posted a few weeks ago, the Logistic Function.  Willis uses a name I'll confess to having never heard, the  “Gompertz Curve.”  Then he goes on to plot some data from various measurements against the Gompertz Curve.  This one is the total deaths from the Wuhan Virus in China. 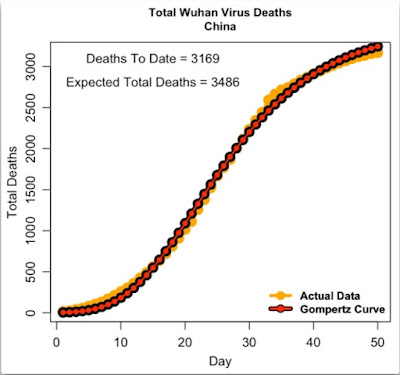 As a By The Way, there was to be SpaceX Starlink launch again this morning of another 60 satellites.  The launch aborted at T=0 in the count, which means the controlling computers saw something they didn't like and shut the engines down.  The vehicle was safe - nothing blew up on the pad or anything dramatic like that, it just shut down.  As of now, there's no announcement of what went wrong and when they plan to retry.  Since it's Sunday, I expect all the usual sources are self-isolated.

Double BTW, remember the SpaceX Starship SN01 tank blowing up on February 29th?  They had started on building SN02 before that happened, and tested it last Monday night, March 9th.  The test was a success, with no repeat of the problems from SN01.