When I was talking about the fun show last weekend, there was one thing I neglected to mention, cunning little runt that I am.  It was Buy A Gun day for me, a bit early (hey - I gotta be at work on 11/6!).

But the last year has brought us options that weren't available then: the XDm 3.8 Compact in .45 ACP, as well as the very small, single stack XDs.   After playing with both guns at a few shows, I decided that XDm Compact worked better for the size of my hands and picked one up.  A few photos: 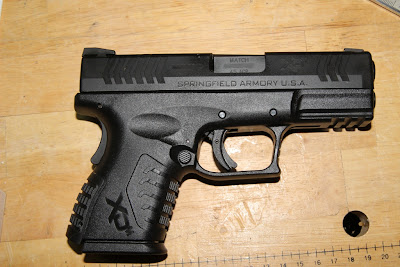 By itself, you don't have much to go by.  It's got a 3.8" barrel, vs. a 3.3 in the XDs and a 3" barrel in the XD subcompact that I've been carrying for two years. In width, it measures within a few thousandths at the grip and a few places I put the calipers - probably just sloppy technique.  It fits my existing holsters, including the one I use most.  It works in my XD Serpa (I hardly ever use it, but it ought to be the fussiest).  With a fully loaded short magazine (pictured) it weighs 2 lb 3 oz. with 9+1 230 grain rounds - as opposed to 2 lbs 0 for my XDsc loaded with 124 gr +P. Side by side, from the rear, they look like this: 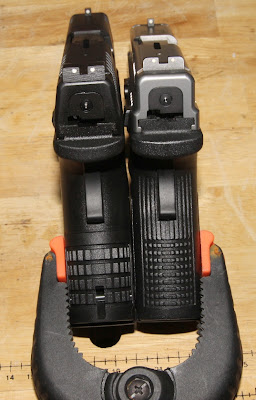 The subcompact is the stainless bi-tone on the right.  The grip texture is different - and that's about it.  A view that shows their dimensional difference is here: 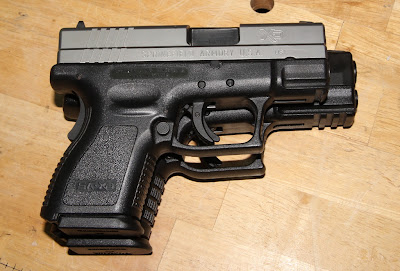 and you can see the only real difference is that the longer barrel of the XDm makes it 0.8" longer than the subcompact.  That 3/4" disappears in the holster, IWB or other.  Ergonomically, the user controls are identical.  Both triggers are long initial pull, then shorter reset.  I know some folks don't like beavertail safeties in general, but I'm used to them by now.  When I tried the .45 out at our favorite indoor range yesterday,  it felt just like my XDsc.  I picked it up and immediately had good results with it.  Same for the diminutive but deadly Mrs. Graybeard, who also loves her XD subcompact.  She picked it up and punched the target like she'd always been using it.

Compared to the XDs, it holds 9+1 vs 5+1.  The 9mm XDsc is 13+1.  The universal trade of # of rounds vs. size is a personal one, and I can't say I have a strong opinion.  It doesn't seem to be any harder to shoot than my 9mm, I really don't feel much difference in recoil, but maybe I'm not "recoil sensitive".  I put only 125 or so rounds through it, just to loosen it up, and of course it was flawless.  No FTF or FTEs; cycled smoothly, and generally behaved perfectly.  Gave it a little cleanup when we got home.

I know that "just another polymer pistol" isn't going to be interesting to a lot of you.  Just another GlockenSpringenSmithenTauren (etc.).  Personally, while I love the look of 1911s, they just don't feel right to me (scorn coming in 3...2...1...).  On the other hand, I like revolvers, but I've never carried a revolver.  I'll take 9+1 with a backup of 13 over 5 and a speed loader any day.