Sometimes I think I'd rather go to Mogadishu than Detroit.  World Net Daily covers a story that shows "a slice of life" in Motor City today:


Even the old-timers in Detroit never have seen anything like this: A mob of 40 black people moved into a convenience store and will not leave.

They say they now own it.
...
Police, ministers, neighbors, the store owner and just about everyone else seems powerless to stop them.

“It’s a Bad Crew gas station,” said one of the mob to the local Fox affiliate. “If you don’t know what that is, I can’t even tell you.”

Police take nine hours to show up, do nothing, and advise the owners to "hire security".


Earlier this month, members of the Perfecting Church, one of Detroit’s largest black congregations, counseled the members of the mob to stop their evil ways.

Nothing changed. Which is not all that surprising: In June, the church’s pastor, Marvin Winans, lost a $15,000 Rolex, a Louis Vuitton wallet with $200 in it and his 2012 Infiniti QX56 SUV after he was carjacked by a mob of 10 black people at a similar convenience store nearby.

My first thought when I read this was Matt Bracken's piece on WRSA "When the Music Stops".  There it is.  Couple this with the bankrupt cities that can't afford to enforce property laws, and issue lists of laws they won't enforce, County Sheriffs telling the citizens that they'd better arm themselves because the Sheriff sure can't protect them, Victor Davis Hanson's descriptions of life in California as essentially being the movie "The Road Warrior", living where bodies just show up in quiet parks, dogs wander without owners, and it just generally has the feel of a third world country.

Maybe I've had it all wrong.  I've been looking for the economic collapse as some sort of big, everything-falls-at-once moment.  Maybe it's more like a hundred lines of dominoes, and the collapse is well under way.  We just won't personally feel it until the next domino over falls on us.  Unless you're already under a domino. 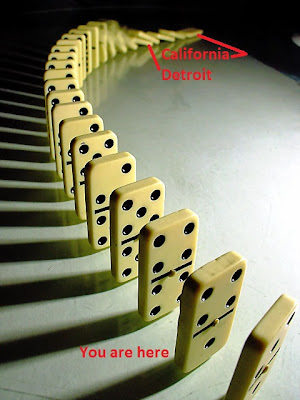