If You Have Warp Drive You Need...

... Impulse drives.  According to C/Net, researchers at the University of Alabama at Huntsville, Boeing, NASA and Oak Ridge National Laboratory are working on nuclear fusion powered impulse drive.  And get this: 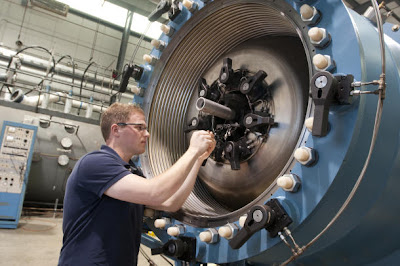 If you're an old NASA geek, you'll know this isn't really new.  As early as 1963, NASA had a program called NERVA - Nuclear Engines for Rocket Vehicular Applications (video of a test firing).  There have been many options considered, from using nuclear power to create ion drives (the Cesium ion drives that have flown in deep space have been conventionally electrically operated) to setting off hydrogen bombs behind a sort of blast shield, to a fusion reaction.  Setting off small nuclear explosions in a combustion chamber was the heart of another NASA project, Orion, which actually traces its roots to the Manhattan Project in WWII.  It is widely acknowledged that political forces caused these programs to be shut down, not technical reasons.  There are simply too many people who panic at the mere mention of the "N" word - Nuclear, in this case.  Setting off successive, tiny (less than 1 ton yield) bombs sounds like "impulse power" to me.

These ships will have to be built in space because the engines will emit radiation.  All of that practice building things for the Space Station might come in handy after all.  The current program is looking at ways to run a fusion reactor as a controlled thrust source that can be turned on, the ship accelerated to the desired velocity, and then turned off until it's needed again.  The Z-Pinch fusion or magnetic containment would keep the fusion flame (the equivalent of a Hydrogen bomb going off) from damaging the ship, and allow much higher velocities than we can currently achieve.  They estimate speeds of over 62,000 MPH are possible, which would reduce a trip to Mars from 8 months to about 6 weeks.  This could make routine flights around the solar system possible.  For the folks who freak out over radiation, using a nuclear rocket would expose the crew to less radiation than our current technology, because they'll spend less time exposed to deep space, and the gamma radiation that comes in from around the universe.